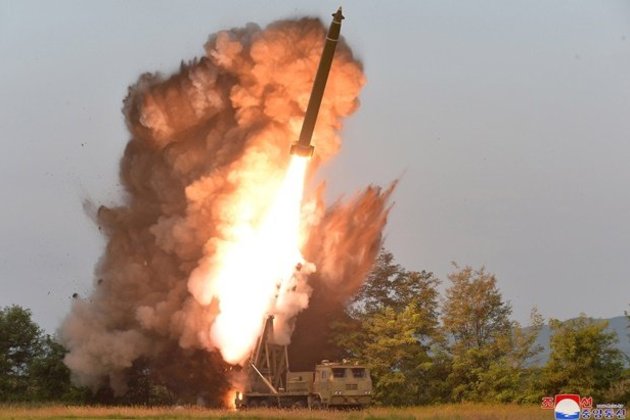 North Korean leader Kim Jong Un has supervised a fresh test of a "super-large multiple rocket launcher" system, state media said on Wednesday - the latest in a series of provocations by Pyongyang.

South Korea's military said on Tuesday that the North had launched "unidentified projectiles" from the Kaechon area in South Pyongan province. They flew approximately 330km.

The launch came shortly after Pyongyang said it was willing to hold working-level talks on denuclearisation later this month with the United States.

The "super-large multiple rocket launcher" was tested in an exercise observed by Kim about two weeks ago.

The KCNA report said the test was aimed at "measuring the time of combat deployment" and implied another test could follow.

"What remains to be done is running fire test which is most vivid character in terms of the power of multiple rocket launcher," KCNA said.

On Monday, the North's vice foreign minister Choe Son Hui said in a statement carried by KCNA that the country had "willingness to sit with the US side for comprehensive discussions of the issues we have so far taken up" later this month, at a time and place to be determined.

Kim and US President Donald Trump adopted a vaguely-worded statement on the "complete denuclearisation of the Korean peninsula" at their first summit in Singapore in June last year, but little progress has since been made on dismantling Pyongyang's nuclear programme.

Trump and Kim had agreed to restart working-level talks during a meeting at the Demilitarised Zone dividing the Korean peninsula in June, but those talks have yet to begin.

Protests in France to block use of Covid health pass

PARIS, France: Thousands of people in Paris and other French cities protested against the introduction of a mandatory COVID-19 health ...

BERLIN, Germany: China and India missed a U.N. deadline to submit new plans detailing how they will reduce greenhouse gas ...

TUNIS, Tunisia: Some 394 migrants were rescued from an overcrowded wooden boat in the Mediterranean Sea on Sunday.The Sea-Watch 3 ...

U.K.'s Channel 4 in discussions for sale to American Discovery Channel

SYDNEY, NSW, Australia - Stocks in Asia were mixed on Wednesday with Japan's indices losing ground, while Australia rose to ...

PARIS, France: The French auto market is not rebounding as quickly as hoped for, with blame being placed on the ...

Zoom to pay $85 mln due to sharing data, 'Zoombombing'

SAN JOSE, California: Zoom Video Communications has agreed to pay $85 million, along with improving its security, as a settlement ...

NEW YORK, New York - Wall Street bounded ahead on Tuesday with solid gains being recorded by all the major ...

San Francisco, California: Even as restaurants struggled to survive during the Covid lockdown in California, many fear they will not ...