Search for gunman after shooting of ten people in Fresno 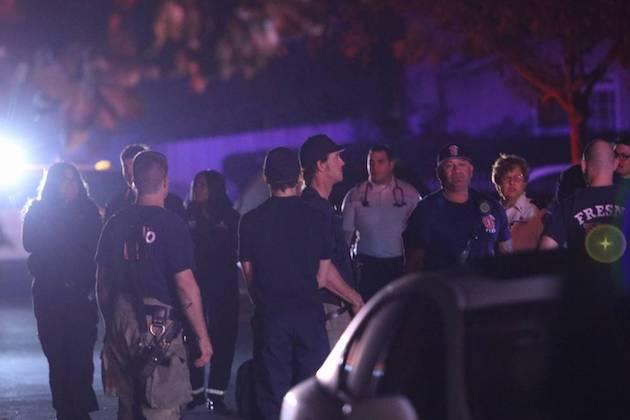 FRESNO, California - Fresno remains in shock after being the latest U.S. city to endure a mass shooting.

The death toll remains at four, with six others injured following the backyard shooting of a group of people at a party watching a football game between the Los Angeles Rams and the Chicago Bears.

The victims, friends and family, numbered around 35 to forty and included a large number of children.

The gathering, in the backyard of a Fresno home was confronted by a lone gunman who arrived and just starting shooting at random.

"Somebody came up on foot, possibly at least one suspect and began firing," Fresno Deputy Police Chief Michael Reid said Sunday. "They fired into the backyard where most of the people were in this party, striking ten people."

The 911 emergency line was flooded with calls resulting if first responders rushing to the scene. They arrived on site around 8:00pm Sunday night.

Police said they had little idea as to the motives of the gunman.

The four people who died were Asian men. Three died at the scene, while the fourth died in hospital. The Fresno County Coroner's Office on Monday confirmed investigators have identified the four victims but said they were withholding their names until their families were notified. Spokesperson Tony Botti said the victims ranged in age from 23 to 40. The social media site Hmong Talk confirmed the identity of one of those killed as a famous Homong singer. "We have received confirmation from his family member that Xy Lee , the famous Hmong singer was indeed one of the victims that was shot and killed at the family gathering. This is truly a heart breaking time for everyone involved. Thank you for all the beautiful music that you have have created . You will truly be miss! RIP!" the post said.

"My heart goes out to the families that are victims of this senseless violence," Deputy Police Chief Reid said. "We are going to do everything we can to find out who the perpetrators are and bring them to justice."

Fresno Police Lt. Bill Dooley, at an earlier media briefing, advised there was no information on the suspect available.

Fresno police have called on anyone in the vicinity of the shooting who may have witnessed it or took photographs or video in their phone to make contact.

Protests in France to block use of Covid health pass

PARIS, France: Thousands of people in Paris and other French cities protested against the introduction of a mandatory COVID-19 health ...

BERLIN, Germany: China and India missed a U.N. deadline to submit new plans detailing how they will reduce greenhouse gas ...

TUNIS, Tunisia: Some 394 migrants were rescued from an overcrowded wooden boat in the Mediterranean Sea on Sunday.The Sea-Watch 3 ...

U.K.'s Channel 4 in discussions for sale to American Discovery Channel

SYDNEY, NSW, Australia - Stocks in Asia were mixed on Wednesday with Japan's indices losing ground, while Australia rose to ...

PARIS, France: The French auto market is not rebounding as quickly as hoped for, with blame being placed on the ...

Zoom to pay $85 mln due to sharing data, 'Zoombombing'

SAN JOSE, California: Zoom Video Communications has agreed to pay $85 million, along with improving its security, as a settlement ...

NEW YORK, New York - Wall Street bounded ahead on Tuesday with solid gains being recorded by all the major ...

San Francisco, California: Even as restaurants struggled to survive during the Covid lockdown in California, many fear they will not ...