Inside the boxful of Georgians dreams 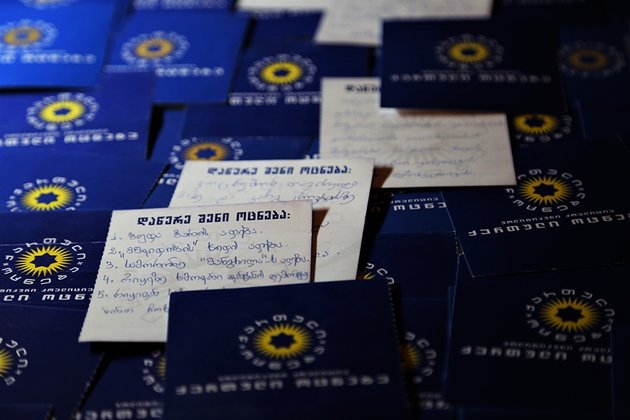 Once upon a time, the richest man in Georgia collected people's dreams.

At a May 2012 campaign rally of the then-opposition alliance led by the Georgian Dream party, chaired by billionaire philanthropist Bidzina Ivanishvili, boxes were set out. Citizens were encouraged to write their "dreams" on cards bearing the party logo and drop them into the receptacles.

"These dreams will come true in October, some even earlier," vowed the Georgian Dream coalition's then-spokeswoman, Maia Panjikidze, referring to the date of the upcoming parliamentary elections.

Thousands filled out the cards and placed them in the dreamcatchers. The Georgian Dream proceeded to win in the elections, leading to downfall of President Mikheil Saakashvili and a promise of new era for the country.

It was a watershed moment for Georgia: the first democratic transfer of power in the nation's history. The fact that Saakashvili's monolithic United National Movement party was replaced with a new ruling force, a diverse assortment of parties and ideas, fostered hope for a more democratic, consensus-based governance. For many, it was indeed a dream come true.

Through all these vicissitudes, the boxfuls of dreams have been gathering dust at Georgian Dream's head office. Sources in the party headquarters told Eurasianet that Ivanishvili and other officials reviewed a handful of the cards but that no one bothered to look at the rest.

Those sources shared the boxes' contents with Eurasianet. They range from pleas for the billionaire Ivanishvili to solve their financial or housing troubles, to outpourings of patriotism, to jocular public service announcements, all providing a glimpse into public sentiment in 2012 when Georgia placed its trust in the eccentric oligarch.

"Dear Bidzina [Ivanishvili], I would like to have my own house, where I can live and bring friends," one wrote, indicating her name and phone number. "My dream is to have lower interest rates on consumer loans, not higher than 36 percent annually, so I can buy things that my family needs," wrote another. (That would have, in fact, been a favorable rate for a loan in Georgia.) "I wish to study in Germany and I wish you best of luck in the election Dear Bidzina...," still another said. A girl named Mariam put in dozens of cards saying that she wanted a guy, one Beka.

Below is a select sample of the wish cards. The "dreamers" phone numbers and names have been left out to protect their privacy.

I wish Mister Bidzina Ivanishvili best of luck in his plans; I wish to have a newly renovated three-room apartment in Tbilisi and a car. I'd like to live in a Georgia where the Georgian spirit and traditions are restored. I wish that, together, we bring down the hater of Georgians, the lover of orgies, the madman, the Mason, the paranoiac Saakashvili.... I want Jessica Alba. My dream is to receive higher education and see smiles return to the faces of the Georgian people. Won't you help me see my son, whom I've not seen for 12 years? I wish, I wish with all my heart, to see my son, who is in Spain. Please help me, Bidzina. 1. Unification and peace to Georgia. 2. Restore Orthodox Christian faith as the Lord demands us to do, not as Misha [Saakashvili] wants it. 3 Decent salaries for doctors 4. I don't have an apartment. I'm a freshman at Tbilisi State University. My dream is to have a job that would allow me to work and study at the same time. I dig the sea of honey with waffle shores. A boat of marmalade is my dream.

Most of the dream cards reviewed by Eurasianet contain economic-themed wishes - the economy was and remains the biggest concern in Georgia - that voters hoped Ivanishvili, the nation's single richest man and a well-known philanthropist before his political career, would personally fulfil. In interviews, Ivanishvili said he did go through some of the dream cards, though it is not known whether he actually made any of them come true.

Still, the dream cards underscore the electoral bargaining power one extravagantly rich man can hold in the largely poor country.

The 2012 election may have been largely a manifestation of voter fatigue with Saakashvili's excesses and high-wire acts, but, as the dream box demonstrated, it was also about many voters' hopes that Ivanishvili, a charitable Forbes-list billionaire, would put his business acumen and vast resources toward economic prosperity in Georgia. Many expected that a vote for the Georgian Dream would net them apartments, cars and home improvement appliances.

The dreams of 2012, to be sure, also showed a healthy dose of skepticism and irony. "Make me rich, Mister Bidzina," wrote one. "In return, I promise to vote for you and for anything you want. I'll do some good things too, but not too often. I'll mostly live a life of luxury and excess. Do we have a deal?"

The appeal of Ivanishvili's personal wealth was also vividly demonstrated in last year's presidential elections, when days before the vote a foundation associated with him offered to pay off citizens' bad debts. His hand-picked candidate, Salome Zourabichvili, prevailed in a runoff, spurring accusations that he had effectively bought her election.

Now Ivanishvili and his party approach another pivotal election amid growing public disillusionment with their rule, not least due to broken promises and broken dreams. His less well-to-do rivals worry that Ivanishvili will again start playing Santa before voters cast their wishes into the ballot box.

Why Biden should not pick Michele Flournoy as defense secretary

If the Democrats manage to push Joe Biden over the finish line in November's election, he will find himself presiding ...

Life could be habitable underground on Mars, scientsts say

MASSACHUSETTS, September 23 (ANI): Recent science missions and results are bringing the search for a life closer to home, and ...

Frantic efforts to rescue whales trapped on sandbars off Australia

PanARMENIAN.Net - Rescuers were scrambling on Tuesday, September 22 to save 270 whales stranded off the coast of the Australian ...

CAMBRIDGE, UK - Scientists at the Massachusetts Institute of Technology (MIT), along with others, have discovered an Earth-sized "Pi Planet" ...

SYDNEY, NSW, Australia - It was all red ink in Asia on Thursday as all the major indices declined.In Tokyo, ...

An employee arranges products to be exported to Russia at a food processing company in Suifenhe, northeast China's Heilongjiang Province, ...

Uzbekistan turns to its massive gold reserves for economic relief

TASHKENT, Uzbekistan - Uzbekistan is turning to its massive gold reserves to help fight its way out of an economic ...