Manfred: MLB will be lucky to finish season amid virus surge 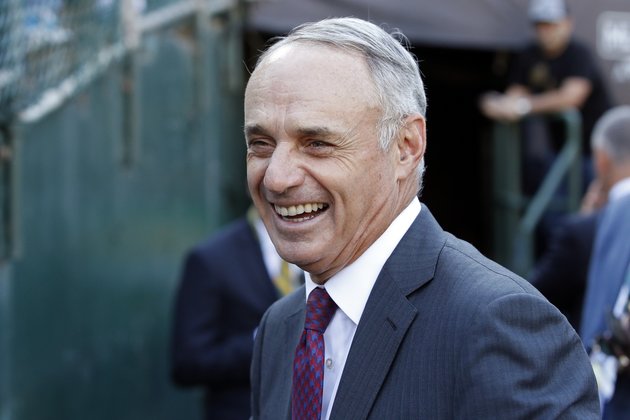 While attempting to clarify comments he made a day earlier that caused a bit of a stir, MLB commissioner Rob Manfred on Thursday admitted the league will "be lucky" to play a full 60-game abbreviated season.

During an interview on the "Dan Patrick Show" on Wednesday, Manfred said, "The reality is, we weren't going to play more than 60 games no matter how the negotiations with the players went or any other factor."

Many saw that comment as potentially something the MLB Players Association could use against MLB should the union file a grievance alleging owners did not negotiate in good faith.

Speaking with USA Today on Thursday, however, Manfred tried to qualify those comments.

"If we had started an 82-game season (beginning July 1), we would have had people in Arizona and Florida the time the second spike hit," Manfred told the outlet.

"My point was that no matter what happened with the union, the way things unfolded with the second spike, we would have ended up with only time for 60 games, anyway," Manfred added. "As time went on, it became clearer and clearer that the course of the virus was going to dictate how many games we could play."

"We just weren't going to be able to play more than 60 games at that point with everything being shut down," Manfred continued, before admitting that even now, "the reality is that we're going to be lucky if we get 60 games now given the course of the virus."

Opening Day was scheduled for March 26 before the coronavirus pandemic shut down sports.

The league has yet to confirm the official 2020 schedule of 60 games, but Opening Day is expected to be July 23 or July 24.

Players proposed a longer season, but Manfred said owners were never going to sign off on more than 60 games for health reasons.