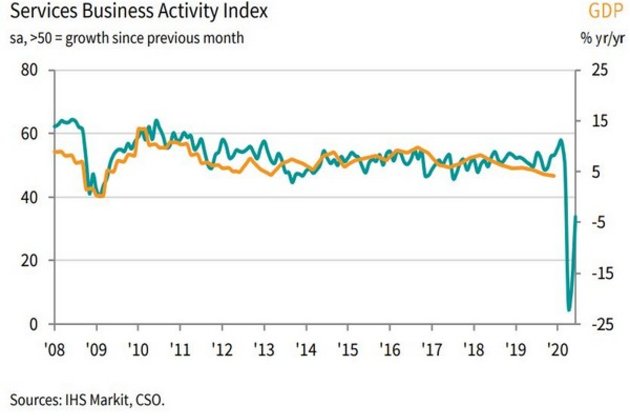 New Delhi [India], July 3 (ANI): The Indian service sector remained under intense strain during June, according to the latest PMI survey released on Friday, as activity fell at another substantial month-on-month rate amid the ongoing economic disruption caused by the coronavirus disease 2019 (COVID-19) pandemic.

Although the deterioration was weaker than in both April and May owing to stabilisation in output levels at some firms, the latest reduction was still stronger than any seen prior to the virus outbreak by a wide margin.

The IHS Markit India Services Business Activity Index recorded 33.7 in June. This was up sharply from 12.6 in May but remained below the neutral 50 mark for a fourth successive month, signalling another decline in service sector output.

Although the downturn lost further momentum in June, it remained excessively strong as the COVID-19 pandemic curtailed intakes of new work and disrupted business operations. The slower rate of decline was reflective of some stabilisation in activity levels with around 59 per cent of firms reporting no change in output since May.

Meanwhile, only 4 per cent registered growth while 37 per cent recorded a reduction.

"Simply put, the country is gripped in an unprecedented economic downturn which is certainly going to spill over into the second half of this year unless the infection rate can be brought under control," said IHS Markit economist Joe Hayes.

"A large fraction of the survey panel are still reporting falling activity and order book volumes, reflecting an intensely challenging domestic picture in India," he said in a statement.

Amid the ongoing disruption to economic activity caused by the COVID-19 pandemic, survey respondents pointed to further weakness in demand conditions. Total new orders fell at a sharp pace during June which firms attributed to reduced consumption habits and lower requirements at key clients.

In some instances, customers had closed their businesses due to the unfavourable environment. Weak demand was particularly acute on the international front with survey data pointing to yet another steep drop in export sales. Restrictions related to travel hindered overseas orders, according to anecdotal evidence.

As conditions continued to deteriorate in June, surveyed companies became more pessimistic towards their prospects over the coming 12 months. Business confidence slid to a survey low and also pointed to strongly negative expectations towards activity levels in the year ahead. The heightened risk of a protracted recession was commonly noted by pessimistic firms.

Meanwhile, employment across the Indian service sector fell during June. Job losses were attributed to lower business requirements although some companies reported poor staff availability. Consequently, there were signs of capacity pressures building in June as outstanding contracts rose despite overall activity continuing to fall sharply.

For a third month running, Indian service providers reported a reduction to their input costs in June. Where a decrease was reported, firms attributed this a general reduction in running costs due to lower activity levels at their units. Although the rate of deflation eased considerably, it was historically marked.

Lower expenses were passed through to clients via discounts in June. Selling charges fell modestly and at a similar rate to that seen in May.

The panel is stratified by detailed sector and company workforce size based on contributions to GDP.