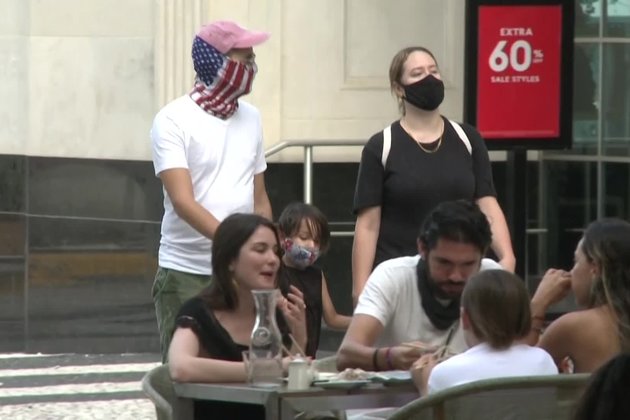 U.S. President Donald Trump said this week that he was "all in for masks," part of a broader shift for Republicans, some of whom have avoided wearing the protection against COVID-19.

There are still some holdouts among the president's party who are not always wearing masks in one of the most difficult social distancing environments in the country: Capitol Hill.

The shift in Republican attitudes toward wearing face coverings to protect others and themselves comes as many states around the country see a spike in COVID-19 cases after initiating partial reopening phases from lockdowns.

Trump said masks were good in an interview with Fox Business Channel on Wednesday, adding that he would wear one if he was in a confined space with other people. Earlier in the month, Trump told supporters at a rally in Tulsa, Oklahoma, "You know, there was a time when people thought it was worse wearing a mask. I let people make their own decision."

Treasury Secretary Steve Mnuchin told reporters Thursday that "because he's the president of the United States and people are not around him and the people who are around are tested, I don't think he needs to wear a mask, but the rest of us, absolutely."

Observation of mask-wearing procedures has turned into a political issue in the United States, exacerbated by confusion over guidelines in the early days of the pandemic.

The Centers for Disease Control and Prevention initially did not recommend members of the public wear masks.

"We have to admit it - that mixed message in the beginning, even though it was well meant to allow masks to be available for health workers, that was detrimental in getting the message across. No doubt about it," Dr. Anthony Fauci, director of the National Institute of Allergy and Infectious Diseases, told National Public Radio on Wednesday.

According to a June 2020 Pew Research survey, Democrats and those leaning Democratic are more likely to say they have worn a mask all or most of the last month by a rate of 76%, compared with 54% of Republicans or those who lean Republican.

But over the past week, several prominent Republicans have publicly urged Americans to wear masks.

"We must have no stigma, none, about wearing masks when we leave our homes and come near other people. Wearing simple face coverings is not about protecting ourselves, it is about protecting everyone we encounter," Senate Majority Leader Mitch McConnell said on the Senate floor Monday.

"In fact," he said, "the more we hate the pain and suffering that accompanied the strict stay-home guidelines a few months ago, the happier we should be to take reasonable small steps every day to ensure our country can stay on offense against the virus."

McConnell has regularly worn a mask in public but has criticized House Democrats for not fully returning to work throughout the pandemic, part of a broader discussion about how and when Americans can safely return to work.

Back in the early days of the pandemic in March, the two chambers of Congress divided on their response to the coronavirus.

House Speaker Nancy Pelosi kept the U.S. House of Representatives out of session into May, concerned about the logistics of hundreds of members of Congress packing into the House chamber for votes. House Democrats eventually passed an unprecedented rules package, allowing a proxy voting system for the first time in the history of that chamber, so members could pass their votes to other members if they chose not to return to Washington.

The Republican-majority U.S. Senate also initially stayed out of session but fully came back to work much earlier in May while following social distancing requirements.

Both chambers observe social distancing requirements during votes and hearings. In the House, some Republicans have resisted the guidelines. Pelosi instituted a mask requirement in all hearings, based on the guidance of the U.S. Capitol physician, on June 16.

Republican Representatives Tom McClintock and Jim Jordan were chided for not wearing masks by House Judiciary Chairman Jerry Nadler during a hearing on June 17. Nadler ignored a request to speak from McClintock because he was not wearing a mask.

"I consider masks much more effective at spreading panic and much less effective at stopping a virus," McClintock said. He eventually put on a mask and was recognized to speak during the hearing.

During House votes Wednesday, several Republicans were observed not wearing their masks or took masks just before going on to the floor to vote. Thousands of people move through the Capitol and its office buildings every day - from members of Congress to journalists, staffers, cleaning crews and food service workers, and security.

But other Republicans have recently urged the public to wear masks. Representative Liz Cheney, a Republican from Wyoming and the daughter of former Vice President Dick Cheney, tweeted a photograph of her father wearing a mask with the caption, "Dick Cheney says WEAR A MASK. #realmenwearmasks."

In the Senate, Republican Senator Lamar Alexander has urged the president and others to set an example for the public.

"Unfortunately this simple lifesaving practice has become part of a political debate that says: If you're for Trump, you don't wear a mask. If you're against Trump, you do," Alexander said Tuesday.

"That is why I have suggested the president should occasionally wear a mask even though there are not many occasions when it is necessary for him to do so," he said. "The president has millions of admirers. They would follow his lead. It would help end this political debate. The stakes are too high for it to continue."

After notably not wearing a mask during trips, Vice President Mike Pence has also begun to wear one. At an event this week in Texas, a state struggling with a new surge in COVID-19 cases, Pence said, "We encourage everyone to wear a mask in the affected areas. Where you can't maintain social distancing, wearing a mask is just a good idea."

WASHINGTON, DC - A Utah man has been charged with breaking into the U.S. Capitol last week wearing a bullet-proof ...

Provided by Xinhua | &A 6.2-magnitude earthquake has killed 35 people in Indonesia, injuring 637 and displacing around 15,000 people.JAKARTA, ...

Four dead, many injured after UN peacekeepers ambushed in Mali

Five United Nations peacekeepers lost their lives on Wednesday, 4 in Mali and one in the Central African Republic. 4 ...

BEIJING, China - A team of 10 World Health Organisation (WHO) experts arrived in Wuhan on Thursday to investigate the ...