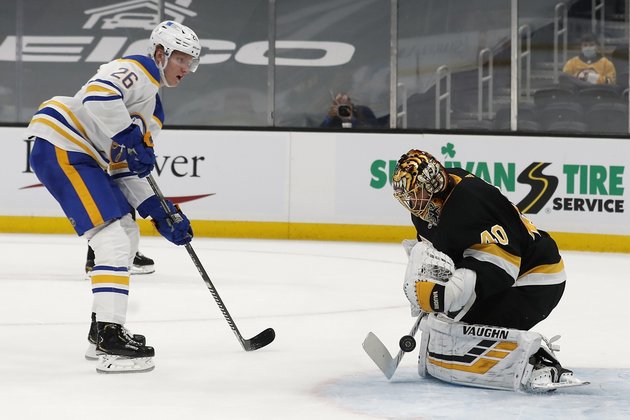 David Krejci and Brad Marchand each had a goal and an assist as the Boston Bruins recorded a 5-2 victory over the Buffalo Sabres on Thursday.

With the game tied 2-2 at 7:58 of the third period, the Bruins scored three unanswered goals. Charlie Coyle broke the deadlock by forcing Sabres forward Sam Reinhart into a turnover near center ice, and Coyle then fought off the backchecking Reinhart to score the go-ahead goal.

Coyle snapped his 28-game scoreless drought at the perfect time for the Bruins (29-14-6, 64 points), who increased their lead to six points over the New York Rangers for the final East Division playoff spot.

Craig Smith had two assists for the Bruins.

Taylor Hall and David Pastrnak scored the Bruins' other goals, with Pastrnak giving Boston an early lead just 1:16 into the game.

Mittelstadt's first-period goal tied the score for the Sabres, but Krejci's power-play marker restored Boston's lead with less than a second remaining in the opening frame. Krejci's shot deflected off both the post and goalie Ukko-Pekka Luukkonen, and the puck rolled over the line just before the horn sounded.

Krejci's goal ended an 0-for-14 power-play drought for the Bruins over their previous seven games.

Tuukka Rask stopped 29 of 31 shots to earn his 13th win of the season.

Luukkonen stopped 35 of 39 shots. Luukkonen has already faced 120 shots over three career NHL games, with the rookie making 109 saves for a respectable .908 save percentage.