WHITE ROCK, BC / ACCESSWIRE / May 5, 2021 / TDG Gold Corp (TSXV:TDG) (the 'Company' or 'TDG') is pleased to provide an update on the interpretation work of the historical drilling undertaken on its Baker Project, a former producing high-grade gold and silver mine located in the Toodoggone Region of northern British Columbia.

The Baker Project consists of several zones (including 2 new targets identified by TDG) and covers a strategic land position between TDG's Shasta project and Benchmark Metals' Lawyers project. Because of the well-maintained road running through the property providing the only real access to the area, Baker has historically represented the gateway to the surrounding exploration areas to the northeast and northwest, where TDG also has its Bot and Mets properties, and Oxide Peak earn-in property. 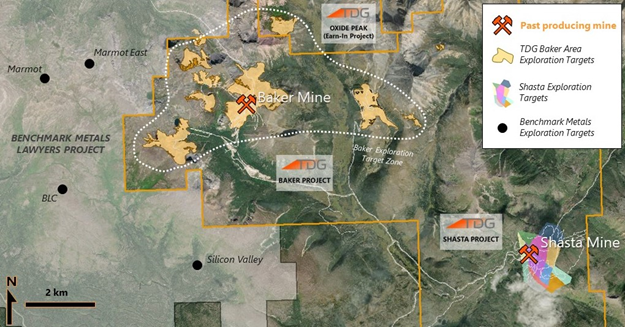 The Baker Mine operated intermittently between 1981 and 1997. Extraction and exploration focused primarily on high-grade veins and structures in underground mines and open pit. In the period 1981-1983 and 1996-1997, 81,878 tonnes of Baker ore were milled, recovering 765,565 ounces of silver and 41,281 ounces of gold. The Baker mill is under care and maintenance. According to two published CIM Bulletins (published in 1985 and 1986), the Baker ore averaged 23.18 grams per tonne ('gpt') gold and 562.5 gpt silver on average, and with a cut-off grade of 9.34 gpt gold; and, 'Recoveries above 94% for gold and 87% for silver were demonstrated in the mill when mill feed calculated heads reached design levels.'

The Baker Project refers to multiple exploration targets located northwest of the Shasta Mine and which are road accessible from the Baker Mill. The area has been explored intermittently between 1974 and 2017 by several operators.

Baker has seen historical extraction of the 'A-Vein,' but several satellite zones have been previously drilled (see Table 1) and largely left intact, the largest of these being the 'B-Vein.'

Baker is situated in a valley which encompasses the A, B, C and D-Veins, Knob Hill and North Quartz target, which are thought to be part of the same system. These are, in turn, surrounded by satellite zones which have seen varying levels of exploration: West Chapelle, Black Gossan, Perry Mason, North Chapelle and Drybrough (see Figure 2). All zones are road accessible with the exception of Drybrough. 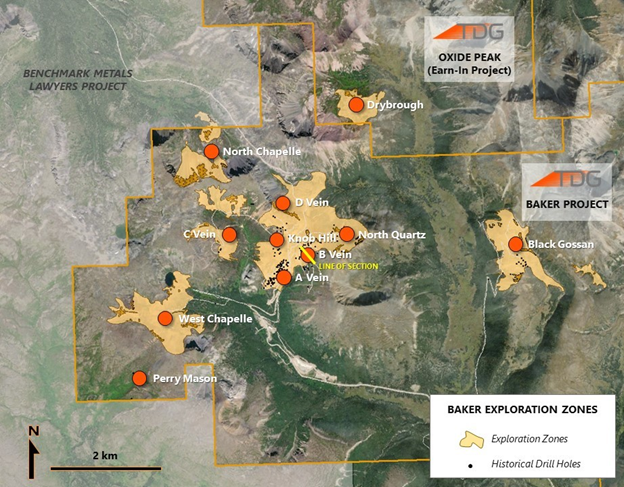 Historical drilling and surface work focused on the high-grade quartz veins within the Baker Project, and to a lesser extent, the wide area of alteration that permeates the valley lithologies. Compilation and reinterpretation of historical data shows the presence of an intrusive quartz-feldspar porphyry in the centre of the valley with the quartz veins circling the contact boundary. The presence of quartz, pyrite, chalcopyrite, magnetite, potassic feldspar and traces of molybdenite in veinlets encountered in past drilling may be related to the margin of a copper-gold porphyry deposit. TDG's 2021 field program will collect additional field data to build upon this hypothesis and investigate the porphyry potential.

Historical drilling has identified at least two quartz-carbonate-sericite-pyrite veins that run sub-parallel to the central quartz-feldspar porphyry stock. These auriferous veins have been identified over a 200 metre ('m') strike length and remain open along strike and at depth. Historical extraction appears to have been limited with much of the mineralized material remaining in place. 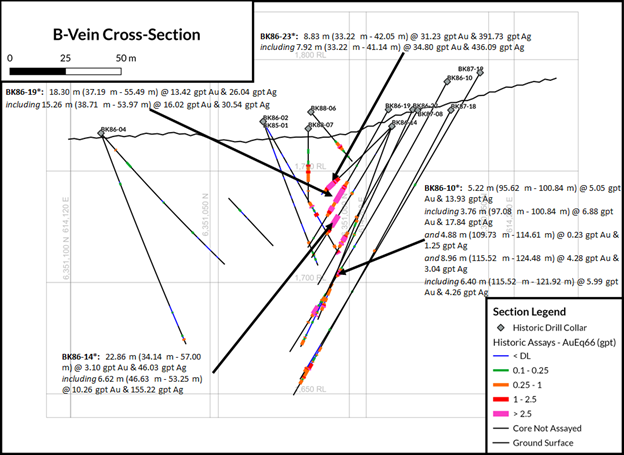 Of the five satellite zones at Baker, only the Black Gossan, West Chappelle and C-Vein have had historical drill programs. Review of high-resolution satellite imagery and compilation of regional structural geology have led to the generation of two new target zones for exploration.

The first is the North Chappelle target located 2.5 km northwest from the Baker Mill site. The target is defined by a conspicuous gossan dome approximately 200 m in diameter, with a surrounding alteration halo. The feature sits in the nose of a structural block between two intersecting regional faults and could be an intrusive cupola isolated from the main Baker body.

The second target, Drybrough, is located on TDG's Oxide Peak earn-in project and lies 3 km north-northeast of the Baker Mill site in the floor of a large cirque. This lower elevation has exposed an area approximately 350 m by 225 m that is defined by gossanous outcrop. It is assumed that the erosion during the formation of the cirque has dropped the valley floor to expose a possible northerly extension of the Baker intrusion.

Both targets will be mapped, prospected and assessed for potential during the 2021 field season.

* Note 1: drill holes with an asterisk denote that assay results are recorded from written reports and government filed assessment reports. Laboratory certificates in these examples have not been found in historical data search. Some records also show that samples were assayed at the Baker Mine Site Laboratory, where no individual assay certificates are recorded.

The technical content of this news release has been reviewed and approved Andy Randell, PGeo., a qualified person as defined by National Instrument 43-101.

TDG is a major mineral claim holder in the Toodoggone District of northern British Columbia, Canada, with over 23,000 hectares of brownfield and greenfield exploration opportunities under direct ownership or earn-in agreement. TDG's flagship projects are the former producing, high-grade gold-silver Shasta and Baker mines which are both road accessible, produced intermittently between 1981-2012, and have over 58,000 metres of historical drilling. In 2021, TDG proposes to advance the projects through compilation of historical data, new geological mapping, geochemical and geophysical surveys, and drill testing of the known mineralization occurrences and their extensions. TDG currently has 64,423,459 common shares issued and outstanding.

ON BEHALF OF THE BOARD