Blue Jays aim for another power surge against Astros 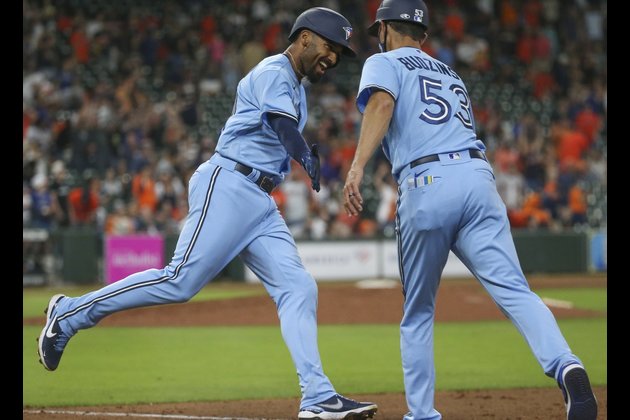 The Toronto Blue Jays produced another power-laden display on offense Saturday, slugging three home runs for the second time in as many games against the Houston Astros, this time earning a victory that evened their three-game series and set the table for a rubber match.

But one of their homers resonated from a historical perspective. Blue Jays third baseman Cavan Biggio cranked his third home run this season in the Blue Jays' 8-4 victory, his first ever at Minute Maid Park. His father, Craig, belted 79 home runs at Minute Maid Park during his Hall of Fame career with the Astros, and the elder Biggio was in the stands to witness his son go yard.

"It was just huge for our team getting on the board early," Cavan Biggio said. "Playing here, in general, is always pretty special not only for me, but for my family. So, it was pretty cool. I'm not going to lie."

Right-hander Nate Pearson (1-0, 6.00 ERA in 2020) is expected to get the nod for the Blue Jays on Sunday, making his first start of the season. It will mark his first career appearance against the Astros. Last season, he appeared in five games (four starts) and gave up 15 runs (12 earned), 14 hits and 13 walks in 18 innings. He struck out 16.

Right-hander Zack Greinke (2-1, 3.76 ERA) will start the series finale for the Astros. Greinke has lasted just four innings in consecutive starts, allowing three runs on three hits and a season-high four walks at the New York Yankees on Tuesday, a 7-3 Houston loss. He will move into a tie for 72nd place on the all-time list with left-hander Chuck Finley with his 467th career start.

Greinke is 4-4 with a 4.04 ERA in 12 games (10 starts) against the Blue Jays, against whom he will pitch for just the second time in the past 11 seasons. He had an eight-year gap between appearances against Toronto before a road start on June 8, 2019, during which he tossed six shutout frames as a member of the Arizona Diamondbacks.

After first baseman Yuli Gurriel carried the offense in the series opener on Friday, Astros designated hitter Yordan Alvarez went 2-for-4 with three RBIs and a run scored to produce his 12th multi-hit game of the season.

Alvarez extended his on-base streak to 14 consecutive games, the longest for a Houston hitter since George Springer reached safely in 15 straight last season, and is batting .407 during that stretch.

Alvarez is known for his prodigious power, and he clubbed his team-leading sixth home run in the fourth inning off Blue Jays starter Steven Matz. But his overall offensive game continues to take shape, and that development is what has the 2019 AL Rookie of the Year on an upward trajectory.

"He's a hitter. He's a hitter with slugger's power," Astros manager Dusty Baker said. "These are the kind of guys you want on your team. This guy has a knack of driving in runs, no matter if it's a right-hander or left-hander (pitching). He's getting better and better and better. It's a pleasure and joy to watch him hit. He just gets the job done, and that's what you've got to do as a really good hitter."

NEW DELHI, India: After being stung by public criticism over the high costs of medical care during the Coronavirus surge ...