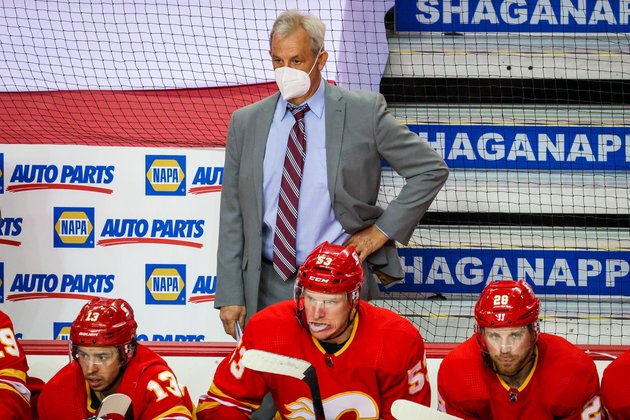 Somehow, the Calgary Flames are still alive in their quest to earn a playoff berth.

Heading into Sunday's home clash with the red-hot Ottawa Senators, the Flames (22-26-3, 47 points) must win their final five games and need the Montreal Canadiens to lose their final two games of the season in regulation.

"The big thing is to win games," Flames center Sean Monahan said. "We're still not out of it, still a chance and (Sunday) we need to win a game. That mindset has got to be there throughout the rest of the year. Regardless of what happens, we've got to be a confident group and not give up. We've got to win games."

The Flames haven't won many games of late. Calgary has lost two straight and three of its past four outings. One of the biggest reasons the Flames are on the brink of elimination is their struggles with the Senators (22-27-5, 49 points). Ottawa has won six of the eight games against Calgary this season, including the past four encounters.

Coach Darryl Sutter used some eyebrow-raising line combinations in Saturday's practice. He had Monahan playing wing with Derek Ryan at center and Dillon Dube at the other side. As well, Glenn Gawdin skated on the fourth line with Milan Lucic and Brett Ritchie.

Gawdin played five games for the Flames earlier in the season and is auditioning for a spot next season.

"It was definitely an eye-opener for things I've got to work on and improve in my game," Gawdin said of his five-game stint. "I tried to look at all the positives as well and continue to push for more ice time and more opportunity, and that's what I'm getting now."

The Senators, who will return home after the Calgary clash to face the Toronto Maple Leafs to close out the season, are among the league's hottest teams right now. A 4-2 win over the Winnipeg Jets on Saturday has the Senators on an 8-1-1 run -- a huge improvement for a team that needed 24 games from the start of the season to win for the eighth time.

Tim Stutzle, the third pick in the 2020 NHL Draft, became the youngest player in franchise history to record a hat trick with his three-goal performance against the Jets.

"I think the whole team did a great job," said Stutzle, who has 12 goals in his rookie season.

"Our line played really well. We had some really good looks and in the end we really deserved that win because we worked really hard.

"I think I had a lot of chances the last couple games, they just didn't go in. It felt good to get those ones."

Stutzle and his linemates Shane Pinto and Connor Brown are closing the season with a bang. Brown reached the 20-goal mark for the second time in his career, while Pinto -- the 2019 second-round draft choice who joined the team after finishing his sophomore year at the University of North Dakota -- has collected one goal and four assists in his past five games. He's played 10 NHL games since leaving school.

"For a couple of years, I wasn't sure if I was was going to be able to get that production back like I had in my rookie year," said Brown, who scored 20 goals in 2016-17.

"To be able to find that offense again, and even a new level of offense, has been satisfying, fun. I'm excited to keep it going, keep building. It's been a lot of fun."