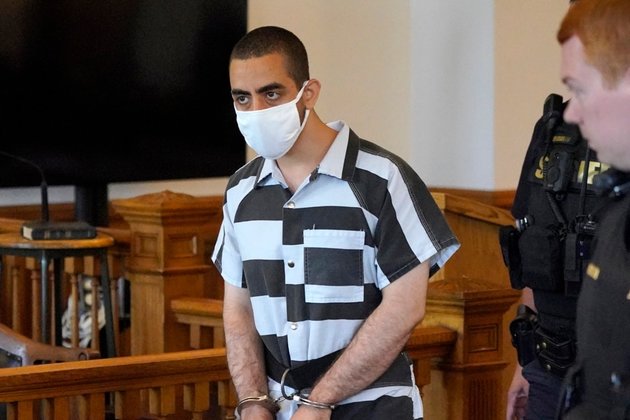 The 75-year-old Rushdie was attacked Friday as he prepared to speak in a lecture hall in Chautauqua, outside the city of Buffalo. He was stabbed in the neck and torso and rushed to a nearby hospital, where he underwent several surgeries. His agent said that his liver was damaged, nerves were severed in one arm, and he might lose an eye, but is on the road to recovery.

Police arrested Matar at the scene. He is being held in the Chautauqua County jail without bail.

In a jailhouse video interview published Wednesday by the New York Post, Matar expressed surprise Rushdie was alive, saying he did not think the writer would survive.

The Post reports, on the advice of his attorney, Matar would not comment if he was inspired by an Iranian fatwa - or religious edict - calling for the author's death, following the publication of Rushdie's 1988 book 'The Satanic Verses."

The late Iranian Supreme Leader Ayatollah Ruhollah Khomeini issued a fatwa calling for Rushdie's death in 1989. Matar said he respected the late ayatollah, calling him a great man, and said he had only read a few pages of Rushdie's book.

The accused assailant, however, said he did not like Rushdie. The Post quoted Matar saying, "I don't think he's a very good person ... He's someone who attacked Islam, he attacked their beliefs, the belief systems."

Matar denied being in contact with Iran's Revolutionary Guard and alluded to acting completely alone. He told the Post he was inspired to go to Chautauqua after seeing a tweet sometime in the winter announcing Rushdie's visit and described how he took a bus to the area the day before the attack.

Iran's Foreign Ministry this week denied any involvement with the incident or the accused.

Matar was born in the United States but holds dual citizenship in Lebanon, where his parents were born. His mother has told reporters in interviews that Matar was changed when he returned from a visit to see his father in Lebanon in 2018.

Some information in this report came from The Associated Press and Reuters.