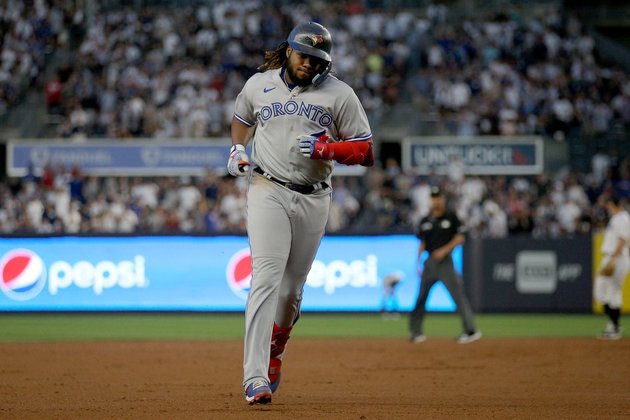 Vladimir Guerrero Jr. hit a three-run homer to cap a five-run second inning and spoil the home debut of Frankie Montas as the Toronto Blue Jays opened a pivotal four-game series with a 9-2 victory over the slumping New York Yankees on Thursday night.

Toronto beat the Yankees for the fifth time in 13 meetings this season and moved within nine games of New York's American League East lead.

Leadoff man George Springer had five singles, including an RBI single that preceded Guerrero's 26th homer. Alejandro Kirk added an RBI double along with a bases-loaded sacrifice fly and Toronto scored its first run on a groundout by Santiago Espinal.

Jose Berrios (9-5) rebounded from a pair of rough outings against Cleveland and Minnesota and pitched 6 2/3 effective innings. Berrios allowed two runs (one earned) on six hits, struck out nine, walked one and worked around his throwing error.

After Josh Donaldson's midnight 10th-inning grand slam gave the Yankees an 8-7 win over Tampa Bay on Wednesday, the Yankees scored their runs on balls that did not get past the infield.

DJ LeMahieu hit an infield single in the third inning that scored Jose Trevino from second when Berrios bobbled the ball and threw wide of Guerrero at first. Estevan Florial scored the second run on Judge's groundout.

Montas (4-10) tied a season high by allowing six runs for the second time in three starts with the Yankees to go along with eight hits in six innings. He struck out two, walked one and threw 92 pitches.

After Springer singled for a 2-0 lead, Guerrero lined a 1-0 95 mph fastball into the first row of the right field seats for a 5-0 edge. Guerrero's 362-foot homer was his fifth against the Yankees this season and 13th career homer against New York.

Kirk's double made it 6-2 in the fifth and the Blue Jays added three in the seventh off Albert Abreu. Following a fielding error by LeMahieu, Kirk lifted a bases-loaded sacrifice fly and Hernandez followed with his double.