Streaking Lions chase four in a row, brace for Bills 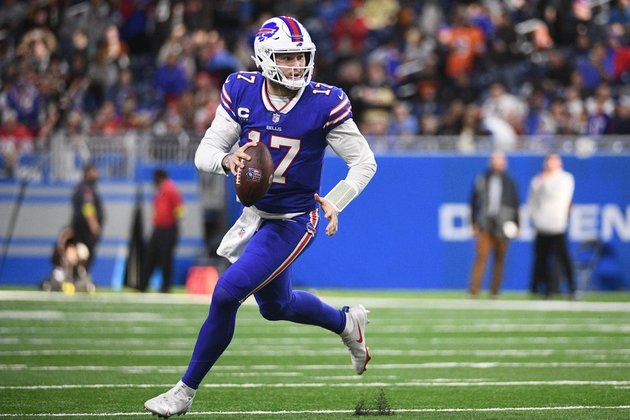 Heading into November, the Detroit Lions resembled a train wreck. Entering their traditional Thanksgiving Day game, the Lions are suddenly on the fast track to playing meaningful games in December.

Their hopes of entering the playoff picture could quickly be derailed when they host the powerful Buffalo Bills (7-3).

Detroit (4-6) comes into the game with a three-game winning streak, including a convincing 31-18 road triumph over the New York Giants on Sunday. The Lions will be seeking to string together four consecutive wins for the first time since 2016, when they had five victories in a row.

"It's huge. I think just getting a win against a good team on the road is always a good boost," quarterback Jared Goff said. "We came into that game, all we heard about was how good they were in the red zone, how good they were on third down. And we said, 'Well, we're pretty good in the red zone too, and we're pretty good on third down.' And being able to prove that against a good team on the road is a lot of fun, and hopefully that carries over."

The Lions have a razor-thin margin for error, but an upset Thursday would put them in the NFC wildcard race.

"None of it matters in my opinion if we don't win this next one," coach Dan Campbell said. "We're in a good place, the guys understand the things that we're doing that are allowing us to win. And we've got to continue to do that, and I know we can't start thinking other things and get ourselves out of the mold of what we've been the last three weeks. We've got to stay the course."

Protecting the ball has been a key component to the turnaround. They've committed just one turnover in the past three games.

In an ironic twist, the Bills have spent more time in Detroit's Ford Field lately than the home team. A massive snowstorm in the Buffalo area forced a relocation of the Cleveland-Buffalo game to Detroit last week, and the Bills snapped a two-game losing streak with a 31-23 victory.

Quarterback Josh Allen was held to a modest 197 yards passing but connected with Stefon Diggs for a touchdown in the closing seconds of the first half. Allen led them on five scoring drives in the second half, four of which ended with Tyler Bass field goals.

"Everyone expects him to be Superman every game all the time, every throw," coach Sean McDermott said. "I just love the fact that A, he's human, and B, that he was able to work himself through (a slow start). That says way more about him than probably most people give him credit for in terms of his performance."

Buffalo is familiar with playing in Detroit and no stranger to Thanksgiving Day games. The Bills defeated the New Orleans Saints 31-6 last Thanksgiving and recorded a 26-15 victory over Dallas in 2019.

"For the players and coaches who have never done it before, I think it's an honor and fun to be a part of a tradition like that, especially playing at Detroit, who has traditionally played on Thanksgiving," McDermott said.

Detroit's top cover corner, Jeff Okudah, is expected to miss the game due to a concussion.

Center Mitch Morse (elbow, ankle) was among the Bills who didn't practice on Tuesday.