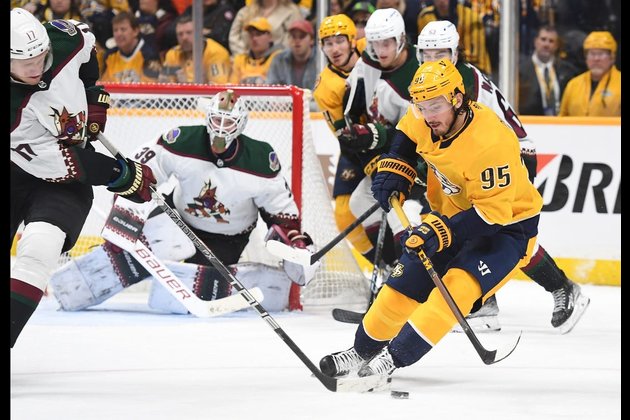 The surging Nashville Predators will interrupt a lengthy stretch of home games with a quick trip to Detroit on Wednesday.

Nashville finished a five-game homestand with four victories and an overtime loss, pushing their season record above the .500 mark. Following their visit with the Red Wings, the Predators will play three more home games.

In their latest outing, the Predators pulled out a 4-3 shootout win over Arizona on Monday. Cody Glass scored the clincher during the shootout session.

Nashville scored two regulation goals on the power play, a unit that has struggled most of the season. The Predators' power play percentage is 17.3 percent, which still ranks in the bottom five in the league.

"Our game is ascending here," forward Matt Duchene said. "It's getting better and we've had to shake some things up here and there with our line combos, D-combos, power play. We got our big unit back (Monday) and we took care of business, which was great. Could have won it in overtime as well, but I think it's a step in the right direction. We've just got to keep building and can't get comfortable with what we're doing. We've just got to stay hungry and keep growing."

All of Nashville's recent wins have come by a one-goal margin. The Predators scored two goals in the first two minutes of the third period to take a 3-2 lead against the Coyotes, then gave up a short-handed goal which eventually forced overtime.

"I thought there were some good things," coach John Hynes said. "In the third period where we had an opportunity to really take advantage of it, we didn't do it. So I think that's something that will be addressed, but I liked how we came out in the third period."

Nashville will be facing the Red Wings for the first time this season. Detroit hasn't played since blowing out Columbus 6-1 on Saturday at the tail end of a four-game road trip.

Defenseman Filip Hronek had the first multi-goal game of his career. Hronek also scored the previous game, a 7-4 win at San Jose. During those two victories, the back line produced six goals.

"It helps spread our offense out," coach Derek Lalonde said. "I like that offense is coming from our defense also, but we're just simplifying our offense. It's more about getting bodies and pucks to the net."

The forwards did their share as well. Team captain Dylan Larkin piled up five points over the last two games and Dominik Kubalik has scored in three of the last four games.

The Red Wings are 2-0-1 in their last three games. They haven't made the playoffs the past five seasons but there's growing optimism that their streak will be broken.

Detroit opens a five-game homestand against the Predators. The Red Wings are 5-2-2 on their home ice.

"We've got a long way to go," he said. "We're there now through sheer will and commitment and it's a huge credit to our guys. ... We're willing our way to where we are right now, but how sustainable that is, we'll find out from this group."