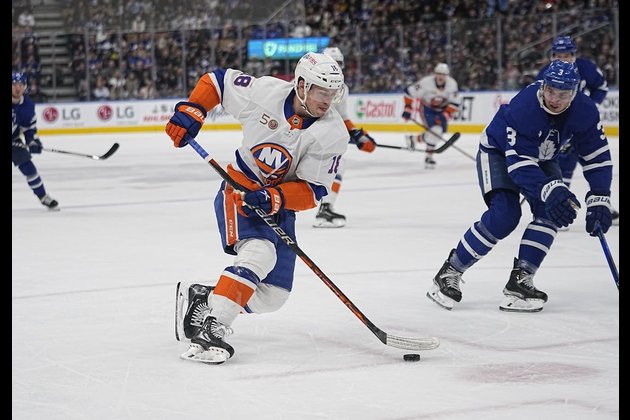 The Edmonton Oilers couldn't do the same -- but they had a reasonable excuse as the latest team to fall victim to the red-hot New Jersey Devils.

The Islanders and Oilers will both be looking to playmore complete games Wednesday night, when New York hosts Edmonton in a Thanksgiving Eve clash in Elmont, N.Y.

Both teams were off Tuesday following their games a night earlier. The Islanders overcame a late deficit in the third period to edge the Toronto Maple Leafs 3-2 in overtime. The Oilers fell to the surging Devils, 5-2.

The Islanders' win ended a two-game losing streak and salvaged a split of a four-game road trip, even as New York gave up the first seven shots of Monday's game and were outshot 32-24. According to Natural Stat Trick, the Maple Leafs had 12 high-danger chances compared to five for New York.

"At the end of the day, it's what happens on the scoreboard," said Islanders center Josh Bailey, who forced overtime by scoring with 2:58 left in the third. "I think we were all a little bit tired. We've been on the road for a little while. It's part of playing in this league and you've just got to grind it out some nights."

Anthony Beauvillier followed with the game-winner 1:56 into overtime for New York, which completed its fifth comeback from a third-period deficit and improved to 3-0 in overtime games this season.

"Probably didn't really deserve two points tonight," Beauvillier said. "It's one of those games where you've just got to be patient and you've got to bear down on your chances. That's what we did. Wins are wins. When points come like that, we'll definitely take it and get out of here."

The Oilers, who have alternated losses with wins over their last seven games, weren't able to overcome their mistakes against the Devils, who tied a franchise record by winning their 13th straight game Monday night.

Leon Draisaitl scored a power-play goal with 6:58 left in the first to tie the game for the Oilers, who fell behind for good when goalie Stuart Skinner turned the puck over next to the Edmonton net, leading to what amounted to an empty-netter for Dawson Mercer 5:15 into the second.

Ryan Nugent-Hopkins pulled the Oilers within 3-2 at the 4:52 mark of the third and nearly tied the score a little more than two minutes later, when his point-blank shot sailed just high of the net. Tomas Tatar scored on the next trip down the ice for the Devils.

"There were individual errors in our game tonight and you can't do that and expect to outscore mistakes," Oilers head coach Jay Woodcroft said. "We clawed back. There was game and fight in our team and we made it 3-2 at the beginning of the third period with a chance to tie it.

"In the end, self-inflicted, individual mistakes cost us."