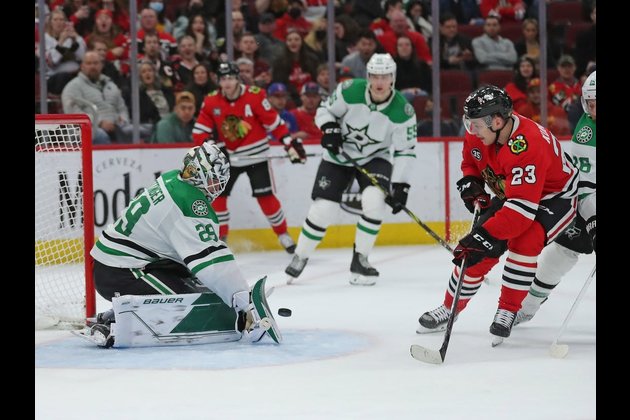 The Dallas Stars are seeking a bounce-back win when they host the reeling Chicago Blackhawks on Wednesday.

The Central Division-leading Stars are coming off a 3-2 shootout loss to the visiting Colorado Avalanche on Monday, while the Blackhawks have dropped four straight following a 5-3 setback tothe visiting Pittsburgh Penguins on Sunday.

The Stars battled back from one-goal deficits twice against the defending Stanley Cup champions. Jason Robertson's second goal of the game with 26 seconds left in regulation tied the game 2-2.

In the shootout, Tyler Seguin and Joe Pavelski each missed for Dallas before Mikko Rantanen wristed a shot over Jake Oettinger's glove for the decisive score after Robertson shot the puck over the net in Dallas' final attempt.

"It's always a good point when you're playing the Stanley Cup champion," Dallas coach Peter DeBoer said after the Stars' first shootout of the season.

Robertson's 14 goals are third-most in the league, entering Tuesday. He's scored 12 of them during his current 12-game point streak, which is one game short of the all-time Dallas mark set by Dave Gagner in 1993-94.

The Blackhawks have dropped six of their past seven games, with just one of the losses coming in overtime.

Chicago trailed the Penguins 3-0 after Rickard Rakell scored at the 4:07 mark of the second period before Jujhar Khaira and Patrick Kane pulled the Blackhawks to within 3-2 entering the final period.

After the Blackhawks tied the game on Philipp Kurashev's unassisted goal with 4:11 left in the game, Sidney Crosby regained the lead when he scored what turned out to be the game-winning goal just 57 seconds later. Crosby finished with a goal and three assists, with his final helper coming on Jeff Carter's empty-net goal with 17 seconds left.

"We gave ourselves a chance to get back into it," Kane said. "We played well. It's just tough to give up a goal right after (tying the game). Good player makes a good play on their team, and all of a sudden, you're down again, and you're fighting for it with a few minutes left. It's a tough situation.

"We got away (last night) from the work ethic and battling throughout the whole game no matter what happens. And we found that again tonight, so that's a positive."

Soderblom was elevated into the starting lineup after Alex Stalock (3-2-1, 2.93 GAA) suffered a concussion against the New York Islanders on Nov. 1.

"(Alex) has had good days and bad days," Chicago coach Luke Richardson said of Stalock, who has yet to return to practice. "I don't think there's a timeline because everyone's a little different."

The Blackhawks are led by Kane, who has three goals and a team-high 11 assists for a team-leading 14 points, while Max Domi has four goals and eight assists. Jonathan Toews is the only other Blackhawk in double figures in scoring, as he has a team-high eight goals to go along with four assists.