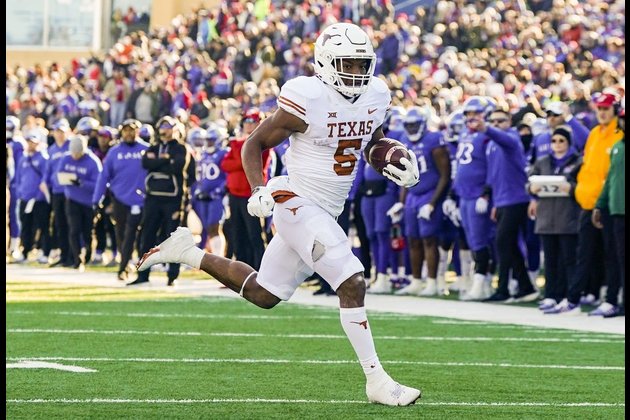 No. 23 Texas will look to keep its chances of playing for the Big 12 Conference championship alive when it hosts Baylor on Friday in Austin in the teams' final-regular season game.

The Longhorns (7-4, 5-3 Big 12) must beat Baylor and have Kansas beat No. 12 Kansas State on Saturday night to earna berth opposite undefeated TCU in the league championship game. The Bears (6-5, 4-4) already are bowl-eligible and will aim to derail their longtime rival's title hopes.

"We all understand the ramifications of where it's at in the Big 12," Texas coach Steve Sarkisian said Monday. "We don't shy away from those things. We've got to do our part and see what happens after that."

The Longhorns re-entered the College Football Playoff rankings Tuesday after a dominating 55-14 road victory over Kansas on Saturday, their second win in their past three games.

Bijan Robinson rushed for a career-high 243 yards and four touchdowns in just three quarters as the Longhorns finished with 539 total yards -- 427 on the ground. Texas also got 108 yards on 11 carries from Jonathon Brooks in an effort that included two TDs in the fourth quarter, one of which covered 70 yards.

The victory over Kansas ensured that Texas will have a winning season, and at No. 24, the Longhorns also moved back into the AP Top 25 as the only four-loss team that's ranked. Texas' four losses are by a combined 18 points.

"You can always look back and play the 'what-if' game," Sarkisian said. "'What if' this play and 'what if' that play in a couple of other ballgames, but in the end, the resiliency our guys have shown, I'm very proud of that."

Baylor came within a hold-your-breath, last-play field goal of ruining TCU's undefeated season in a 29-28 loss in Waco on Saturday. The Bears will head into the regular-season finale looking to secure their 11th seven-win season in the past 13 years.

The Bears churned out 501 yards of total offense -- their fourth game of the season with 500-plus yards -- kept the ball for nearly 34 minutes and effectively shut down explosive TCU until the last seven minutes. Baylor's Blake Shapen passed for 269 yards and a touchdown while Monaray Baldwin made six catches for 123 yards.

The Longhorns lead the overall series 79-28-4, including a 48-10-2 all-time mark in games played in Austin. Baylor captured last year's contest in Waco 31-24 but has not won in Austin since 2014, a three-game losing streak.