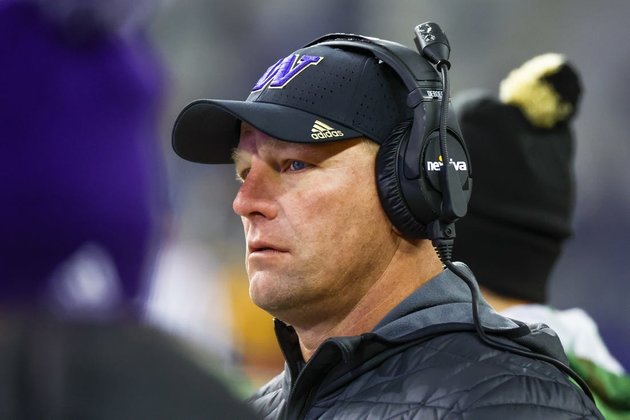 First-year Washington coach Kalen DeBoer had his contract extended through the 2028 season on Tuesday.

DeBoer has guided the Huskies to a 9-2 record so far, establishing a program record for victories by a first-year coach. Washington is currently ranked 13th in the College Football Playoff rankings.

"My family and I have loved every minute of being here at this amazing institution in this world-class city," DeBoer said in a statement. "We talk all the time about how it's the people who set a place apart and Husky Nation is filled with some of the best we have ever encountered. We are incredibly grateful for the support we have received and are excited to continue to build on the amazing tradition of success we have here at the University of Washington."

The Huskies look for their first 10-win season since 2018 when they visit Washington State in the Apple Cup on Saturday night.

"It is clear that Kalen is such an amazing fit at the University of Washington," athletic director Jen Cohen said in a statement. "He has come in and made an incredible impact in every aspect of the program, our department, the University and the Seattle community. Kalen is an elite competitor who approaches each and every situation with the utmost class and integrity. We couldn't be more excited that he and his family will be on Montlake for the foreseeable future leading these tremendous young men in our football program."

DeBoer is in his third season as a major college head coach. He went 12-6 in two seasons at Fresno State prior to taking the Huskies' job.

Earlier in his career, DeBoer went 67-3 and won three NAIA national championships during a stint at Sioux Falls from 2005-09.