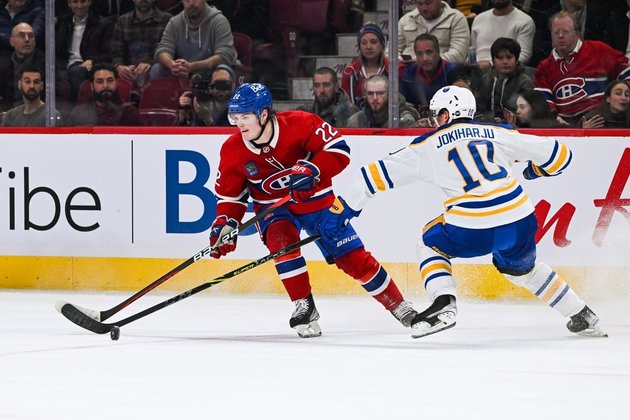 Jeff Skinner had two goals and three assists as the Buffalo Sabres snapped an eight-game losing streak with a 7-2 win against the host Montreal Canadiens on Tuesday.

Tage Thompson contributed one goal and three assists and Alex Tuch and Rasmus Dahlin each had a goal and two assists for the Sabres. Henri Jokiharju and JJ Peterka also scored, Dylan Cozens notched two assists and Craig Anderson made 29 saves for the victory.

Cole Caufield and Sean Monahan scored and Jake Allen made 31 saves for the Canadiens, who have lost three of their past four games.

The contest wasn't even a minute old before the Sabres jumped out to a 2-0 lead. Thompson skated to the left circle before spinning around to feed a trailing Dahlin, who had plenty of time and space in the slot before beating Allen blocker side 35 seconds in for a 1-0 edge.

Peterka doubled the margin 17 seconds later. Cozens' attempt at the edge of the crease slid through the bottom of the crease over to Peterka on the right side, and he quickly pounced to push the puck under Allen's pad.

It marked the second-fastest two goals from the start of a game in franchise history after Rick Martin's two tallies in the first 49 seconds on Dec. 18, 1975, against Minnesota North Stars.

Tuch took a feed from Dahlin at the top of the right circle and wired it glove side to extend the margin to 3-0 on a power play at 2:13 of the first period.

It was the second-fastest three goals from the start of a game in Sabres history, behind the mark of 2:11 set back on Jan. 6, 2010, against the Tampa Bay Lightning.

The Canadiens got one back at 2:57 of the first, with Caufield firing a one-timer from the top of the left circle off a feed from Kaiden Guhle to cut it 3-1.

Skinner made it 4-1 at 11:21 of the second period. Tuch dragged the puck around defenseman Mike Matheson and got it to Thompson, who skated to the goal line before sending it to Skinner in the low slot.

Monahan scooped up the rebound of his own shot to narrow the difference to 4-2 at 13:57 of the middle period.