No. 21 Tulane, No. 25 Cincinnati clash with championship on horizon 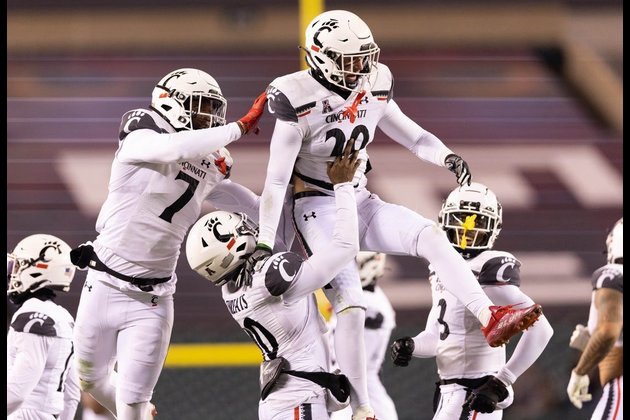 No. 25 Cincinnati is familiar with competing for the American Athletic Conference championship.

But both teams will meet as equals on Friday in an AAC showdown in Cincinnati.

The winner will claim the regular-season conference title and host the AAC championship game next Saturday.

The Bearcats (9-2, 6-1 AAC) are two-time defending conference champions and have won 32 consecutive games in Nippert Stadium. Only Clemson (40) has a longer active winning streak at home.

"Nobody wants to be the guy that lets the streak go," linebacker Wil Huber said. "But it's not something that you go into the week thinking, 'I'm not going to lose this streak.' No one goes into a game thinking about not trying to lose. We go into every game expecting to win."

Cincinnati, which qualified for the College Football Playoff last season, is 31-4 since the start of the 2020 season.

"I want them to embrace the opportunity that they've created and enjoy it," Cincinnati coach Luke Fickell said of his players. "It doesn't always happen at the end of November that you're playing for the championship in the final game. They've created this and they deserve to enjoy it."

Fickell said he's unsure if starting quarterback Ben Bryant will be available. Bryant suffered a foot injury during the first half of a 23-3 win at Temple last Saturday.

Evan Prater replaced Bryant and would start if Bryant is unable to go.

"I think he's ready," Fickell said of Prater, who completed 12 of 17 passes for 127 yards last week. "It's not going to be too big for him if he has to go in there. In the second half, he did a really good job of managing where we were and what we needed to do."

The Green Wave (9-2, 6-1) were picked seventh in the AAC preseason poll after finishing 2-10 last season.

"It's a great feeling to reflect back on how bad we did last year and now we've got the chance of a lifetime," said running back Tyjae Spears, who has five consecutive 100-yard games and is 4 yards short of 1,000 for this season. "We're just living in the moment, trying to make the most out of the opportunity we have."

Tulane sat alone atop the conference standings before losing to UCF 38-31 two weeks ago but bounced back with a dominant 59-24 victory against SMU last Thursday. Quarterback Michael Pratt passed for three touchdowns and ran for three more.

"We played a great game and we're going to have to play great again on Friday," Green Wave coach Willie Fritz said. "We've got to take care of business. This is a big, big challenge for us."

Tulane first appeared on the national radar this season after upsetting Kansas State 17-10 on the road on Sept. 17. Fritz said he expects a similar atmosphere in Cincinnati.

"This is a big deal for our program," Fritz said. "We try to do the same preparation if at all possible every single week."

These teams could meet again in the championship game, or the winner could face either UCF or Houston depending on what happens Saturday when UCF faces USF and Houston plays Tulsa.