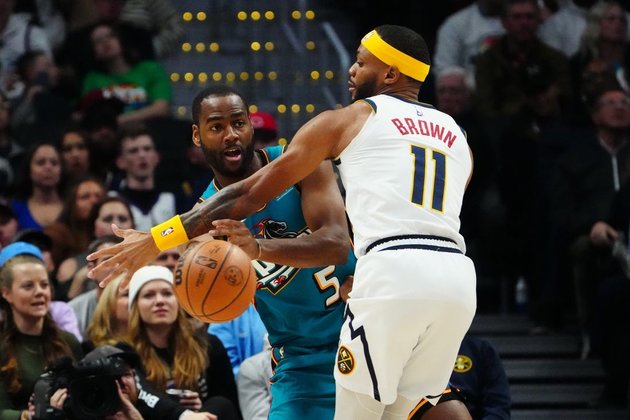 Bojan Bogdanovic had 22 points and nine rebounds, Alec Burks scored 21 and the visiting Detroit Pistons ended a seven-game losing streak with a 110-108 win over the Denver Nuggets on Tuesday night.

Kevin Knox II had 17 points and Marvin Bagley III scored 14 for Detroit, which improved to 1-10 on the road this season.

The Pistons played without Cade Cunningham (left shin soreness) for the seventh straight game, and Saddiq Bey (sprained right ankle) missed his second in a row.

Denver's Nikola Jokic had 31 points, 10 assists and nine rebounds in his return from a three-game absence caused by the NBA's health and safety protocol. Michael Porter Jr. scored 18, Aaron Gordon had 17 points after missing three games due to an illness, Bruce Brown finished with 11 and Jamal Murray and Kentavious Caldwell-Pope had 10 each.

Murray, back after sitting out two games due to health and safety protocol, added eight assists.

Detroit led by two after three quarters and quickly increased the gap to 92-84 behind eight combined points from Burks and Hamidou Diallo.

With the Nuggets down by 12, Denver's Zeke Nnaji scored the next four points, but a 3-pointer by Cory Joseph made it 99-88, and Bogdanovic hit a leaner to put Detroit ahead by 13 with 6:36 to go.

Jokic hit two free throws with 46.1 seconds left. Burks traveled, and Jokic hit a layup with 13.2 seconds remaining to cut the deficit to 108-107.

Bogdanovic was fouled and made both free throws with 8.2 seconds left for a three-point lead. Murray was fouled with 2.2 seconds remaining. He made the first free throw and intentionally missed the second. Gordon got the rebound, but his baseline fadeway was off.

Detroit took a 58-57 edge into halftime and the lead fluctuated throughout the third quarter. The Pistons brought an 83-81 lead into the fourth.