US Backing for Kazakhstan Remains Firm Despite Flawed Election 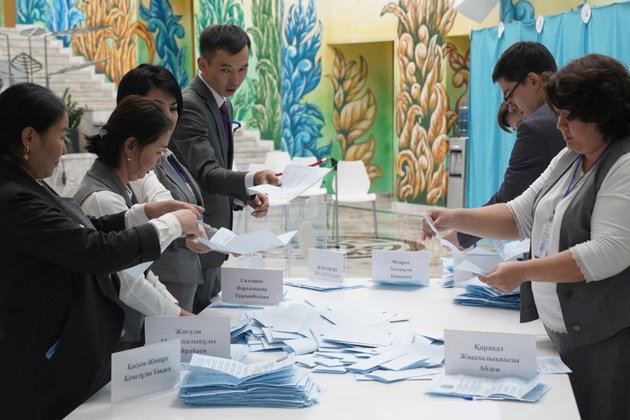 Washington     - The United States reaffirmed Tuesday its support for the independence and territorial integrity of Kazakhstan despite the findings of international observers that a weekend presidential election fell well short of democratic standards.

"We look forward to working with President [Kassym-Jomart] Tokayev and his government to advance our common objectives," said State Department spokesman Ned Price in a statement released two days after Tokayev cruised to victory against only token opposition with more than 81% of the vote.

"The United States also reiterates its unwavering support for Kazakhstan's sovereignty, independence, and territorial integrity, which has been the bedrock of our partnership for over 30 years," Price said.

While pledging to work with Tokayev, whose country represents the largest U.S. business partner in Central Asia, the State Department concurred with the findings of an Organization for Security and Cooperation in Europe observer group that judged the election seriously deficient. 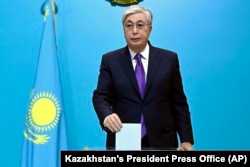 The OSCE observers noted that Tokayev, who took over in 2019 from post-Soviet strongman Nursultan Nazarbayev, "stood as the joint candidate of all parliamentary parties and, in effect, was not meaningfully challenged in a low-key campaign."

Tokayev will now serve a seven-year term at the helm of the strategically located Central Asian nation bordering Russia and China.

The OSCE's Office for Democratic Institutions and Human Rights (ODIHR) assessed political participation in the election as "significantly constrained, with limitations on fundamental freedoms." The group's preliminary statement noted that democratic safeguards were disregarded in voting and counting, undermining transparency.

Kazakhstan's Foreign Ministry denounced the ODIHR report as 'biased conclusions, demonstrating a complete unwillingness to recognize the development of the internal situation in our country.'

'The content of the OSCE/ODIHR's statement demonstrates a lack of desire to develop long-term and constructive cooperation with Kazakhstan authorities, which will, undoubtedly, be taken into account,' Astana warned.

U.S.-based independent analysts joined the OSCE in expressing disappointment with the election, in which five other candidates for president were on the ballot, but none of them directly challenged Tokayev. He also did not debate any of the other candidates.

"This election was rushed," said Gavin Helf from the U.S. Institute of Peace at a Caspian Policy Center discussion in Washington, stressing that "Tokayev's guaranteed reelection is not going to help with external legitimacy in the West." William Courtney, America's first ambassador to Kazakhstan, now at the RAND Corporation, said Tokayev has raised expectations at home and abroad with public promises of democratic reform. But this election, he said, changes nothing.

"Is government keeping up with civil society or is the gap between expectations and reality widening?" Courtney asked. "The election is a missed opportunity in the West, seen as fundamentally no different than other elections -- snap election, no meaningful choices."

Kazakhstan still lacks democratic institutions and an independent judiciary, he added, factors that are "important for investors as well as those interested in the political development of Kazakhstan."

Experts saw parallels to balloting in neighboring countries, such as Uzbekistan, where President Shavkat Mirziyoyev was reelected in a similarly uncompetitive fashion last year. ODIHR has never called an election in any of the former Soviet republics of Central Asia free and fair, except for noting relative democratic progress in Kyrgyzstan.

The government did not permit an independent investigation, but Tokayev promised accountability, which Human Rights Watch and other groups say he has yet to deliver.

"Our country must shun a close-minded, inward-looking strategy, and look toward the future," Tokayev wrote in Politico two months ago, claiming "a democratic mandate to implement a vision for a fairer, more open Kazakhstan." 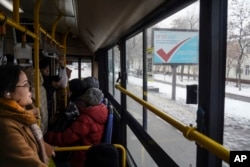 FILE - An election poster, in the background, is seen through a bus window in Almaty, Kazakhstan, Nov. 17, 2022.

Tokayev has promised "to decentralize decision-making, strengthen rule of law, increase international competitiveness, and ensure equal opportunities for every citizen."

He claims a "new Kazakhstan" will leave its super-presidential system behind, elevate parliament and local administrations, and ease the registration of political parties, abolishing constraints on opposition.

But Western observers do not yet see the signs of progress.

"I think Tokayev very likely wants a more functional state, which 'listens' more to its population," Helf, of the U.S. Institute of Peace, told VOA, but "this weekend's election and the campaign that preceded it show that he's not interested in meaningful political competition."

"Tokayev would have won against any candidates who wanted to challenge him. His mandate would have been even more legitimate if he had allowed some opposition," Helf said.

Richard Hoagland, a former U.S. ambassador to Kazakhstan, called at the Caspian Policy Center forum for deeper engagement with the country.

"If we want to raise our influence, the simplest way to do it is through high-level visits," said Hoagland, who urged leading members of Congress and Cabinet secretaries to tour the region. No U.S. president has ever been to Central Asia.

"I don't think we fully understand the background and mindset of these countries," he said.

Wilder Alejandro Sanchez, president of Second Floor Strategies consultancy, noted that maintaining a strategic partnership with Washington is just of one of several competing foreign policy priorities for Kazakhstan.

He said these include managing deep ties with Russia and the implications of its war in Ukraine, not least migration of Russians to Kazakhstan; Chinese political and business pressure; and renewed interest from the European Union.