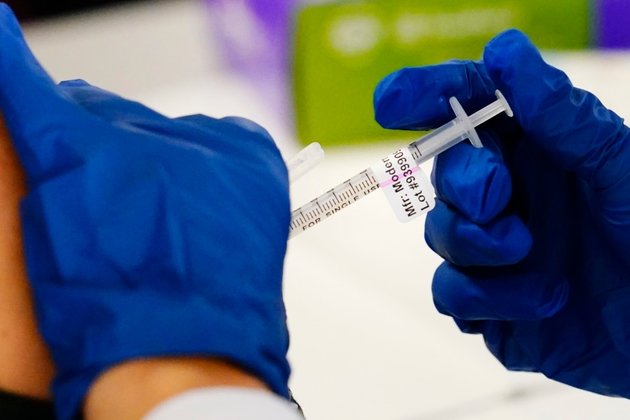 White House - The White House brought out two of the nation's top doctors Tuesday to urge all Americans to update their COVID-19 and influenza vaccinations in the next six weeks as the holiday season approaches.

The nearly $500 million effort will focus on reaching older Americans and communities hardest hit by the virus, which has killed more than 1 million and infected nearly 100 million in the U.S. since the pandemic began.

The Centers for Disease Control and Prevention is currently reporting a 'substantial' decrease in weekly deaths, which it attributes to two factors. The first is high levels of population immunity, which are a result of either vaccination or prior infection. The second is improvements in early treatment for high-risk patients.

The White House said it would increase vaccination efforts over the next six weeks by investing $350 million into community health centers for vaccination events or activities that encourage vaccination. The federal Department of Health and Human Services will also award $125 million in grants to organizations that serve older adults and people with disabilities so they can support those communities.

Additionally, the federal agency that oversees the government-funded health insurance programs Medicare and Medicaid now has expanded powers to enforce compliance from nursing homes, which are required to offer vaccines to residents.

The U.S. has donated 665.2 million vaccine doses to 116 countries, the White House said. And last week, the Biden administration asked Congress for $1 billion in supplemental funding for global COVID-19 efforts. That funding, the White House told VOA on Tuesday, would support ongoing vaccination campaigns and test-and-treat programs. The money would also go toward integrating COVID-19 vaccination into the schedule of routine vaccines, which is how the spread of the polio virus was neutralized. The Global Polio Eradication Initiative was largely responsible for a 99% reduction in global polio transmission as a direct result of the vaccination campaign.

Dr. Anthony Fauci on Tuesday made what may be his final appearance at the White House to emphasize that the vaccine is both safe and effective, but that immunity and protection diminish over time. Fauci, at 81, retires later this year after 38 years as head of the National Institute of Allergy and Infectious Diseases. 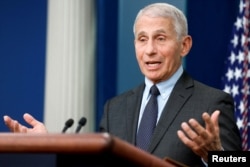 'My final message - it may be the final message I give you from this podium - is that please, for your own safety and for that of your family, get your updated COVID-19 shot as soon as you're eligible, to protect yourself, your family and your community,' he said.

Fauci acknowledged to VOA that misinformation and denialism - some of it coming from the White House during the early days of the pandemic - adversely affected the fight against the quickly changing virus. Critics of then-President Donald Trump say his mixed messages about the virus, his minimization of the situation and his unfounded medical pronouncements were detrimental.

'I contradicted those, which set off a whole series of things in my life,' Fauci said.

'People who have correct information, who take science seriously, who don't have strange, way-out theories about things but base what they say on evidence and data need to speak up more,' Fauci said, 'because the other side that just keeps putting out misinformation and disinformation seems to be tireless in that effort. And it's going to be very difficult.'

Well-known figures, including several U.S. legislators, have spread what critics say is misinformation about the virus. That's what led the social media site Twitter to suspend Georgia Congresswoman Marjorie Taylor Greene in 2021, though the site's new owner, billionaire Elon Musk, reinstated her account this week.

Other legislators have opposed President Joe Biden's vaccine policies and mandates, such as Senator Ted Cruz of Texas, who said "the CDC continues to make recommendations that ignore science, erode public trust, and target Americans' healthcare freedom" in response to a CDC vote to make COVID-19 a required vaccine for public schoolchildren.

Much misinformation has gained a wider audience on social media networks, White House officials said. As White House COVID-19 Response Coordinator Dr. Ashish Jha put it: 'You can decide to trust America's physicians, or you can trust some random dude on Twitter. Like, those are your choices.'

As the doctors were speaking at the White House, a Twitter user replied, in real time, to VOA's line of questioning, saying, 'They ruined public trust. Most will never trust public health again. Myself included.'