A Message from Shawn Wallace, CEO:

'The successful completion of the second drill program at Margarita marks an important milestone for the project and the Company. We have successfully added dimension and confirmed that the system we are exploring has the potential for continuity of size and grade. It is incredible that less than one year ago, Margarita was a prospect without a single drill hole. Now, as our team begins to plan the next phase of exploration at Margarita, we are also preparing for our inaugural drill program at our Santa Cecilia gold-copper project in the Maricunga belt, which we are also very excited about.'

'With our second phase of drilling complete at the Margarita project we have been able to delineate a mineralized body over an 800 m strike length in a short amount of time. Collectively, the different styles of mineralization encountered, and the two orientations of mineralized structures, demonstrate a robust system with significant potential to both expand the mineralization along the Falla 13 corridor and find new bodies of mineralization at untested, geologically similar targets. Over the next several months we will refine our targets through additional soil sampling with an emphasis on gold, additional induced polarization (IP) lines in the northern region of the project and continued geologic mapping. We look forward to outlining our third phase drill program for the project.'

Geologic Discussion of the Falla 13 Discovery:

The results of the 12 RC drill holes that have tested the north - northwest trending Falla 13 discovery demonstrate a consistently mineralized copper-gold system over an 800 mstrike length. The discovery to date exhibits a number of distinct styles of mineralization, including: high-grade magnetite breccia bodies, disseminated mineralization within two distinct intrusives with dioritic and monzodioritic compositions exhibiting pyrite - chalcopyrite and chalcopyrite only, respectively. In addition, both structurally controlled and sub-horizontal manto-style mineralization that occurs at the contact between overlying volcanics and intrusive rocks are observed both in drilling and on the surface through geological mapping, respectively.

The mineralization along the Falla 13 structural corridor is interpreted to have four separate domains based on cross cutting west - northwest (WNW) trans-tensional structures where minor dextral offset of the main mineralized structure is observed (Figures 1 - 2). Importantly, one of the prominent WNW trending structures has been drill tested and is mineralized with drill hole 22MAR-023R intersecting 30 m of 1.02 g/t Au and 0.57% Cu within a broader interval of 130 m of 0.37 g/t Au and 0.28% Cu. The recognition of a second orientation of the mineralized structure within the emerging discovery at the Falla 13 area is important as it provides an additional structural corridor to explore and demonstrates the potential of the WNW structures, such as Remolino,across the property (Figure 3).

The mapped WNW trending structures identified across the Falla 13 discovery area have slightly offset the mineralization along the Falla 13 structural corridor into four distinct areas: the northern, central, southern and Remolino domains (Figures 1 - 2). These WNW structures are interpreted to be syn-post mineral in their movement as they are both mineralized and also offset mineralization along the Falla 13 structural corridor and are viewed as potential feeder structures to the drilled mineralized system. The recognition of the WNW structures being mineralized has identified exploration targets immediately adjacent to the drilling completed to date (Figure 2).

The northern structural domain remains open to the north-northwest along strike of the Falla 13 corridor, where drill hole 22MAR-022 intercepted 48 m of 0.37 g/t Au and 0.26% Cu (including 20 m of 0.47 g/t Au and 0.35% Cu). To the north of drill hole 22MAR-022, mapped breccia bodies have been recognized that trend under alluvial cover. An ongoing soil and rock geochemical survey will help determine the full northern extents of mineralization along the Falla 13 corridor; however, previous pXRF copper-in-soils geochemical results suggest a potential 400 m extension to the north (Figure 2).

Currently, Torq is conducting a property-wide gold and multi-element soil geochemical survey to define additional target areas, both within the Falla 13 discovery zone and across the rest of the property. In addition, a ground-based IP geophysical survey will be conducted in the northern third of the property to help define the potential northern extension of the Falla 13 discovery. Over the coming months Torq's technical team will finalize a phase 3 drill program, expected to be between 8,000 m - 12,000 m, with the objective of testing the rest of the targets on the property. 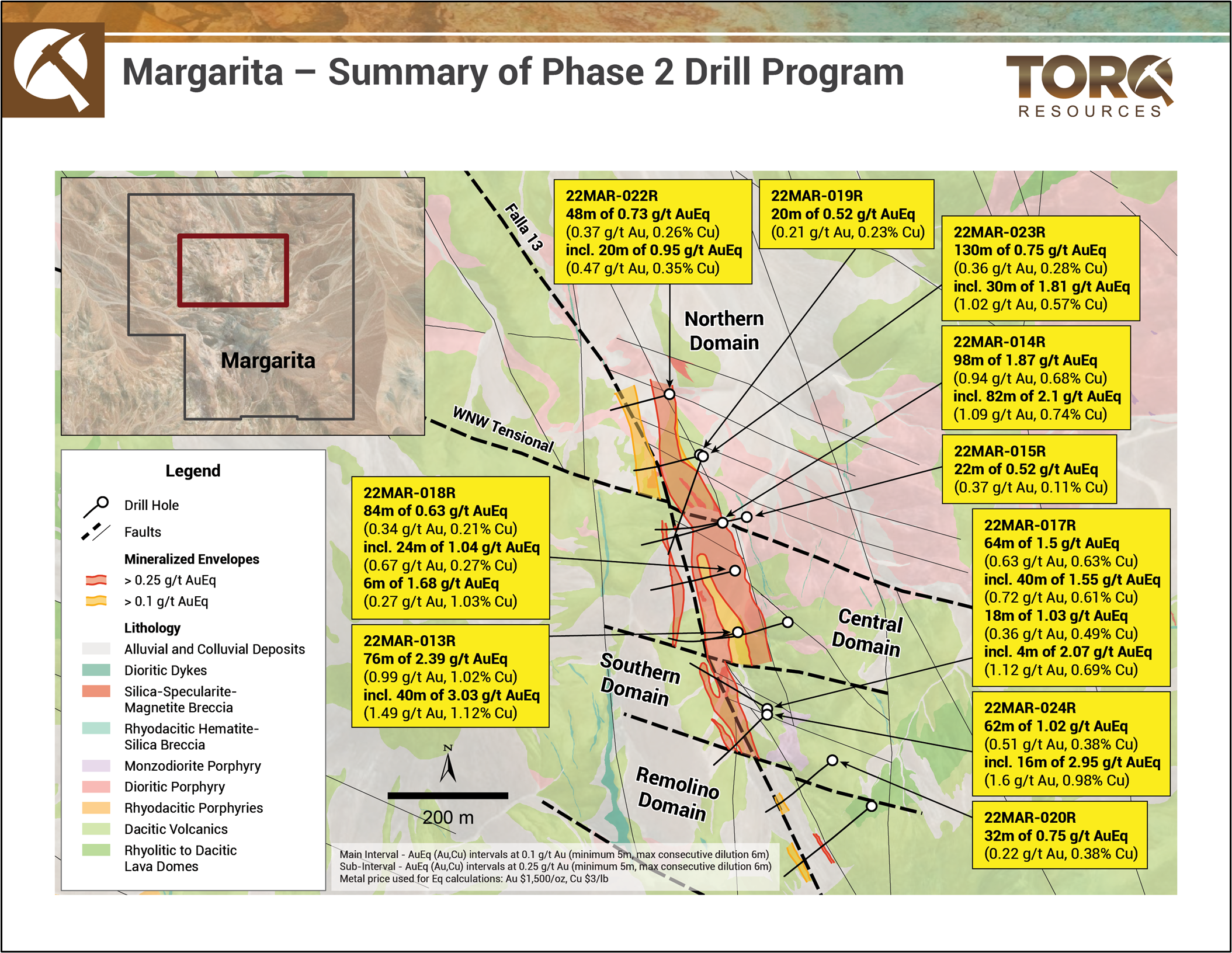 Figure 1: Illustrates drill highlights from the second phase of RC drilling at the Falla 13 discovery zone. 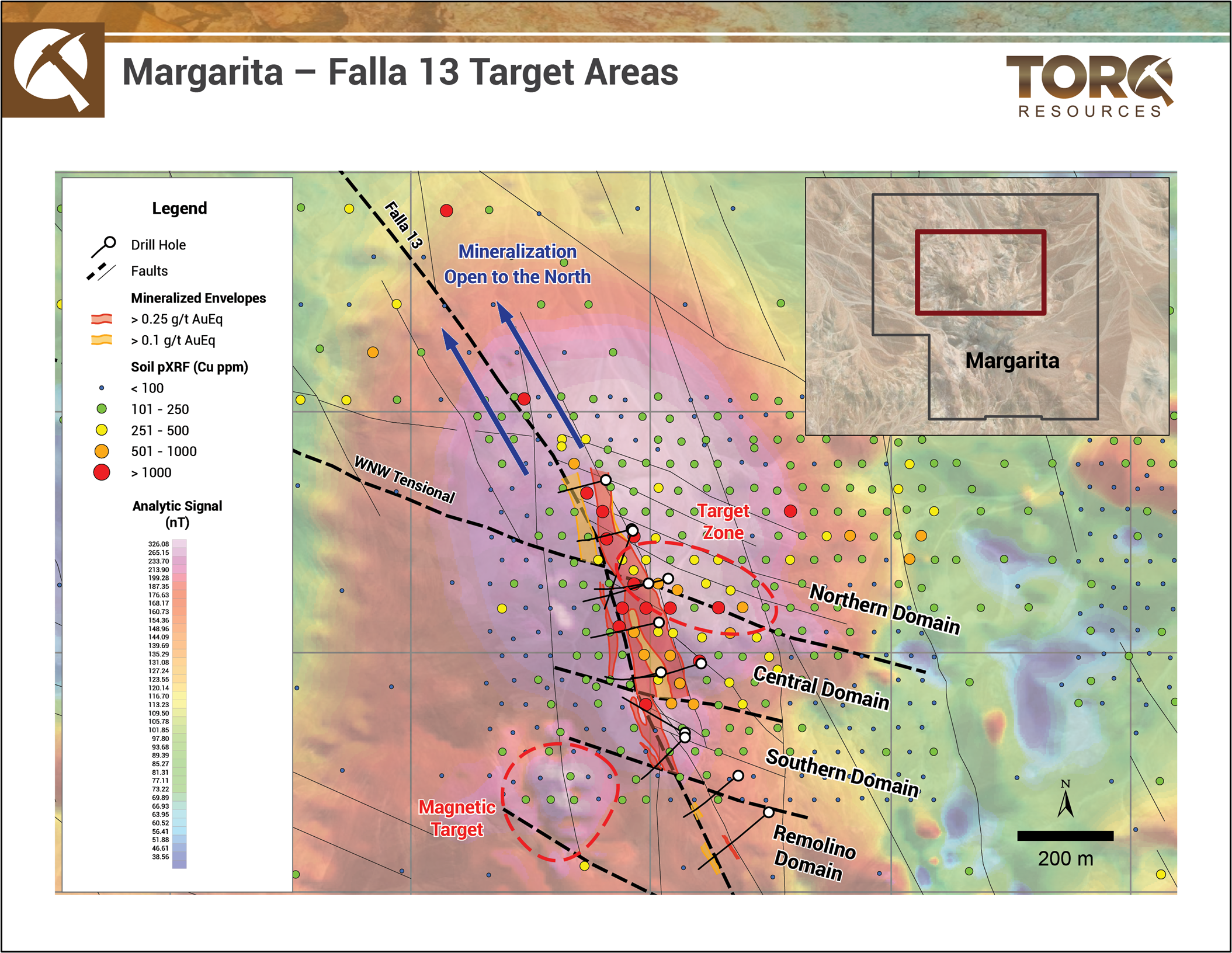 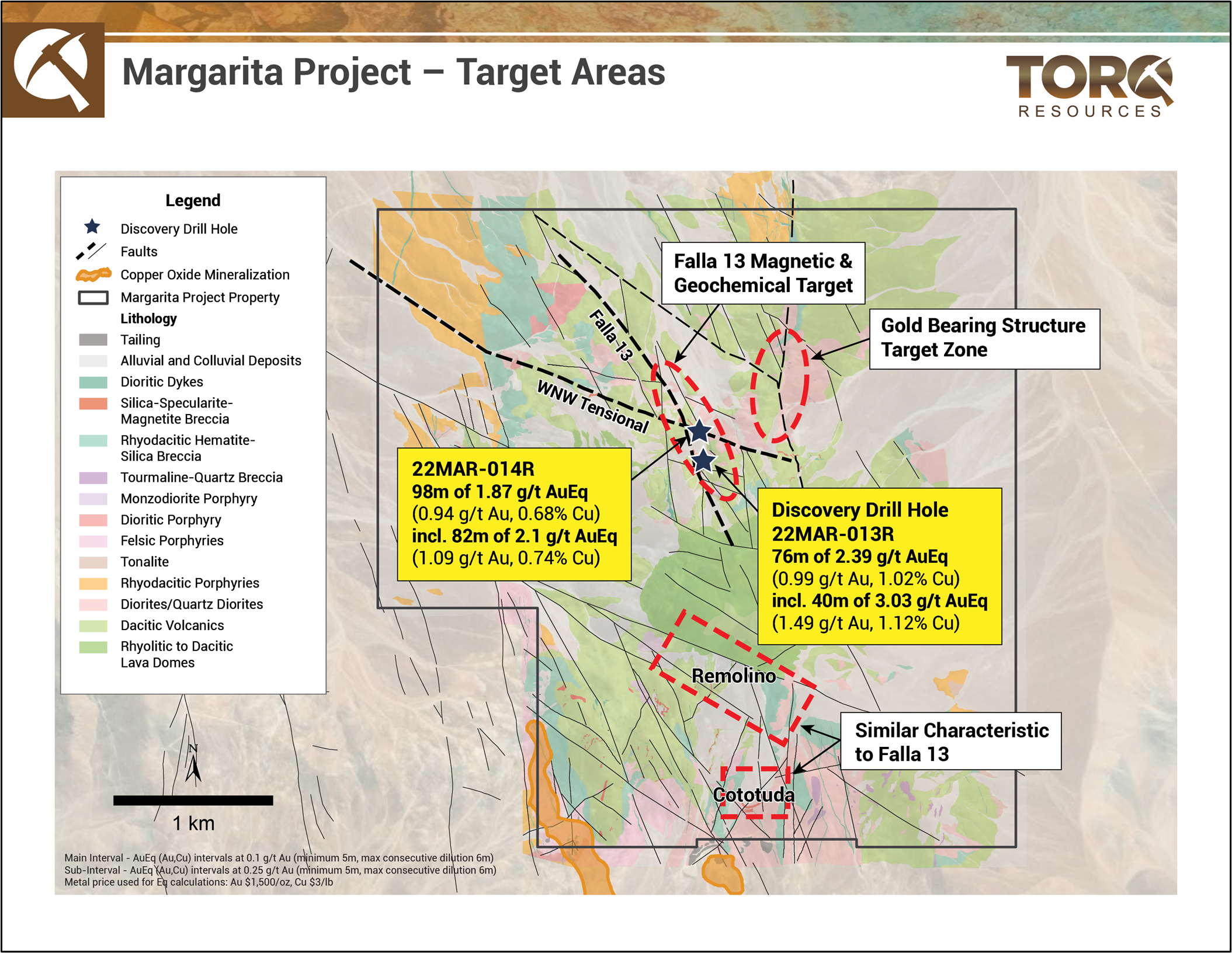 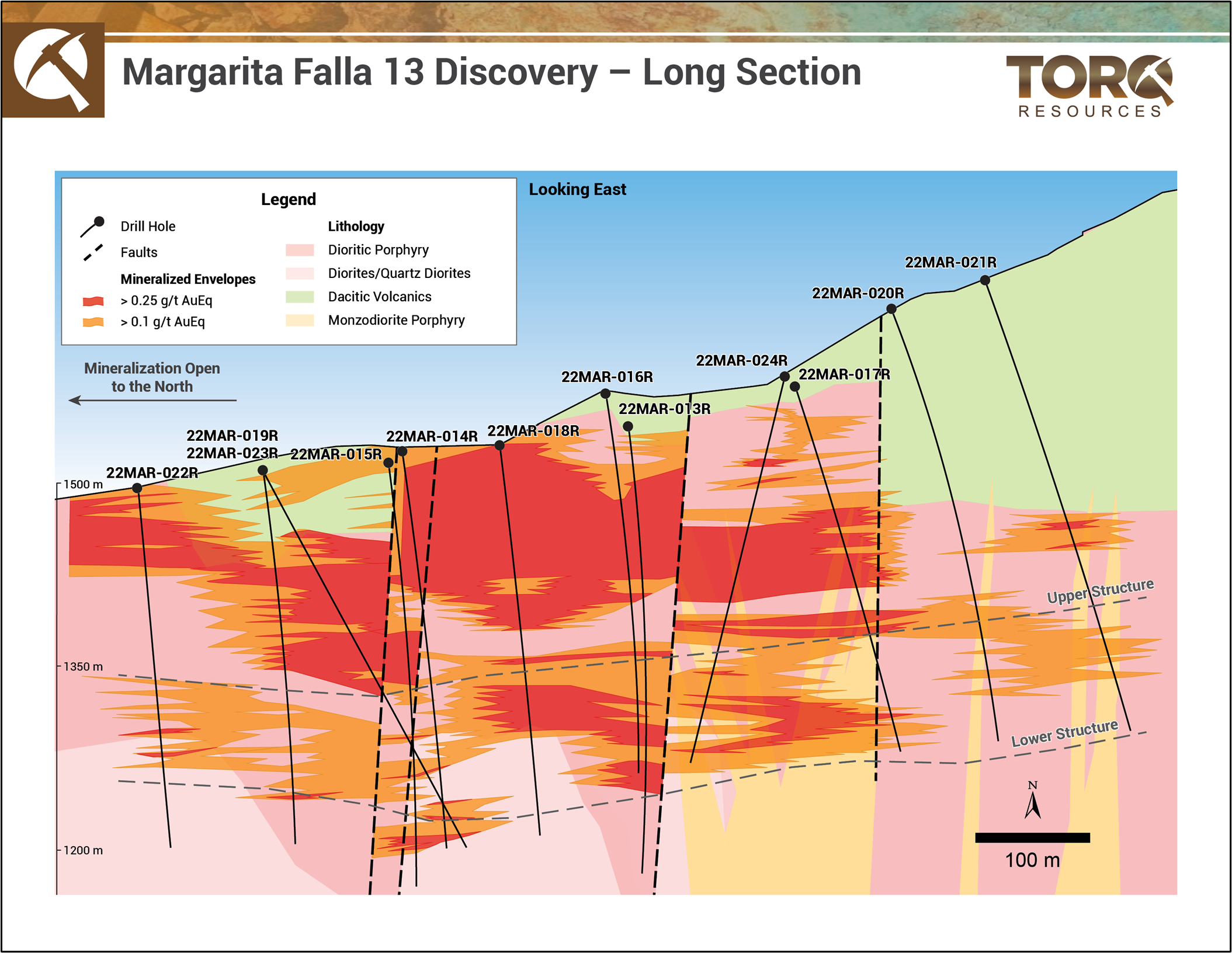 Figure 4: Illustrates a long-section along the Falla 13 discovery with a view to the east. Importantly, high-grade mineralization appears to have a flat lying geometry that is generally located between the contact between dacitic volcanic rocks that overlay a diorite and monzodiorite intrusive complex. A second lower structure encountered lower grades within the phase 2 drill program and demonstrates the potential for parallel structures to be mineralized.

Michael Henrichsen P.Geo, Torq's Chief Geological Officer, is the qualified person as defined by NI 43-101 (Standards of Mineral Disclosure) who assumes responsibility for the technical contents of this press release.

ON BEHALF OF THE BOARD,

For further information on Torq Resources, please visit www.torqresources.com or contact Natasha Frakes, Vice President of Communications, at (778) 729-0500 or info@torqresources.com.

Torq is a Vancouver-based copper and gold exploration company with a portfolio of premium holdings in Chile. The Company is establishing itself as a leader of new exploration in prominent mining belts, guided by responsible, respectful and sustainable practices. The Company was built by a management team with prior success in monetizing exploration assets and its specialized technical team is recognized for their extensive experience working with major mining companies, supported by robust safety standards and technical proficiency. The technical team includes Chile-based geologists with invaluable local expertise and a noteworthy track record for major discovery in the country. Torq is committed to operating at the highest standards of applicable environmental, social and governance practices in the pursuit of a landmark discovery. For more information, visit www.torqresources.com.

True widths of mineralization are unknown based on current geometric understanding of the mineralized intervals.

Canadian mineral terminology and standards differ from those of other countries. The Company's public disclosure filings highlight some of these differences.