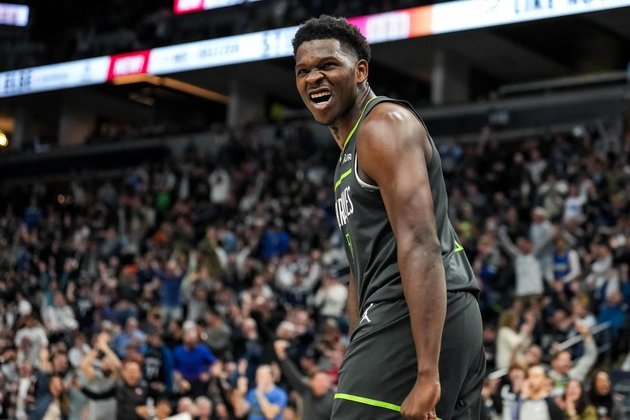 The last time they took the floor, the Minnesota Timberwolves lost to the Houston Rockets, a team riding a 13-game losing streak.

The New Orleans Pelicans will try to end their season-worst five-game losing streak when they host the Timberwolves on Wednesday night.

The Pelicans' streak seemedall but certain to reach five games when visiting Denver took a 19-point lead in the first half Tuesday night, but the home team fought back and took a one-point lead with less than a minute remaining.

Then Nikola Jokic put the finishing touch on his triple-double with a jump hook from the lane to give Denver a 99-98 lead with 16.9 seconds left. The precarious lead held up when New Orleans missed three shots in the final seconds.

"This game comes down to a tale of two halves," Pelicans coach Willie Green said. "First half wasn't us. Even if we get down some points, which happens, I just didn't like our energy in the spirit."

Denver led 63-47 at halftime, but New Orleans had its best defensive half of the season when it held the Nuggets to 36 points in the second half.

"To (the players') credit, in the second half, we came out with a much better effort," Green said. "Once we decided that we were going to try to take care of our home floor we were right back in the game with a chance to win."

CJ McCollum scored 20 points to lead six Pelicans scorers in double figures -- three of them reserves off the bench.

The tone for the Timberwolves' loss was set when the host Rockets scored the first nine points on their way to a 119-114 victory Monday.

"We needed to have a business-like approach, and we started out down 9-0," Minnesota coach Chris Finch said. "That pretty much told me what I was going to be in for the rest of the game."

Finch bemoaned the Wolves' lack of "focus," though Anthony Edwards scored 31 points and D'Angelo Russell matched his season high with 30.

"We just didn't have enough guys play well," Finch said. "We needed more from everybody."

The Wolves did welcome back center Rudy Gobert, who had missed the previous three games because of groin soreness. He finished with 15 points on 5-of-8 shooting and added 16 rebounds and four blocks.

"I felt pretty good," Gobert said. "Started to feel a little tight at the end, but much better than previous days. We'll see how it feels (Tuesday) and the next day, but it's great to be back out there."

Edwards said he and his teammates have shown "a bad tendency" to not be focused early against teams with poor records, such as the Rockets, who have the worst record in the NBA after Tuesday.

"These losses hurt," he said. "I don't even know what to say at this point. That's on us (as players). If this was anybody else, we would have come out ready to play."

The season series will conclude in the regular-season finale for both teams April 9 in Minneapolis.