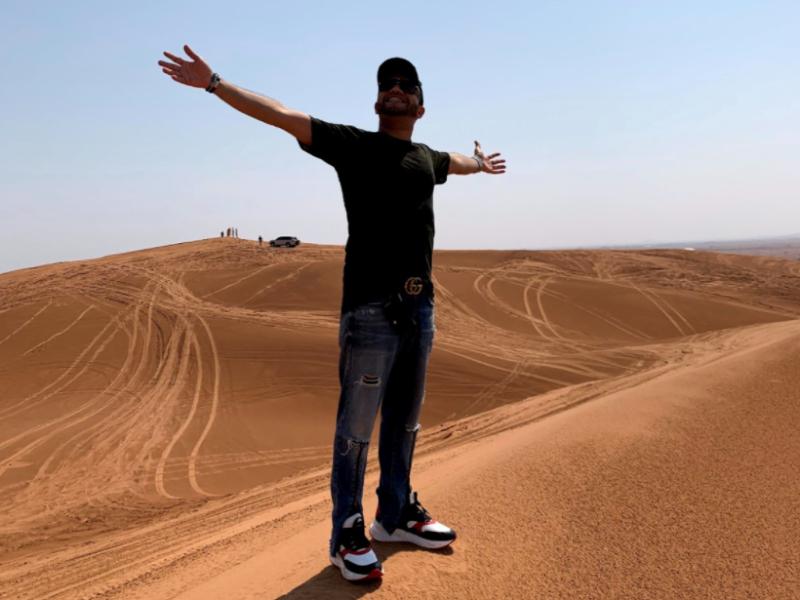 Sam Ibrahim is a graduate of Berkeley. He completed his studies as a Fashion Marketing Major at the top of his class and left the university with honors. Sam would go on to create an illustrious career and become the ultimate multilingual consultant. He also owns Affari Group, one of America's most prominent fashion houses in New York. Affari Group expanded to other continents like Asia, Europe, and the Middle East, with offices in Japan, Egypt, and Dubai.

He would amass more than fifteen years of experience, working alongside some of the world's famous luxury brands. Sam would often travel between Dubai and New York, which is an incredible feat after starting from zero.

Sam Ibrahim has an uncanny ability that has helped him become distinguishable from others in the fashion industry. He can identify fake leather from a mile away and can tell people the manufacturing year of their favorite blazer in seconds. His expert knowledge of design has made everlasting marks in the industry.

Over the years, Sam has worked for the fashion corporations in America and the United Arab Emirates. This includes Bloomingdales, Amazon, Barneys, and Macys.com. Under his direction, each company grew tremendously. Sam also founded two private brands and has directed them all to success. He is also the exclusive distributor for the successful celebrity-owned eyewear brand Prive Revaux, covering the entire MENA region.

The renowned fashion consultant is currently acting as the COO for Affari Group, alongside his partners Gil Einhorn and Hershy Mayer. Sam Ibrahim's commitment to high-end fashion is unquestionable and remains intact as he continues to inject expertise into the field. He can do so by working directly with some of the biggest celebrities on the planet, like Adriana Lima and Jamie Foxx, among many others. Outside of fashion, Sam also manages the biggest celebrity in Africa, Mohamed Ramadan, and the middle east business in America.

Despite achieving great heights with a career that has seen stellar accomplishments, Sam Ibrahim remains humble and down-to-earth. While others embrace a life of fame and leave everyone else who helped them behind, Sam's upstanding Egyptian roots allow him to stay the same person throughout. He attributes all of his unfathomable achievements to the years of hard work, passion, and humility.

Sam Ibrahim is also known to be unpredictable when it comes to fashion. There's never any way of telling what he plans to do next. Other people tend to take their passions too seriously that they lose sight of why they fell in love to begin with. Sam likes to remind people not to forget to have fun along the way. He always finds time to travel whenever he can, having fun, and taking the opportunity to learn about different cultures.

Although he has already done so much, Sam sees himself continuing to work and creating the most recognized fashion brands and expanding them worldwide in the years to come.

To learn more about Sam Ibrahim and Affari Group, you may visit their website. Sam is also active on Instagram.

US, India to hold military exercise near disputed Chinese border

WASHINGTON D.C.: The U.S. will participate in a joint military exercise in mid-October with India, less than 62 miles from ...

MOSCOW, Russia: A leading Russian scientist in the field of hypersonic flight, Dr. Alexander Shiplyuk, has been arrested on suspicion ...

Citing safety of children, LA to move homeless away from schools

LOS ANGELES, California: During a meeting that was disrupted by protesters this week, the Los Angeles City Council voted to ...

WASHINGTON D.C.: The U.S. Justice Department announced this week that former Puerto Rico governor Wanda Vazquez has been arrested in ...

OTTAWA, Ontario: Military trainers from Canada will head to the United Kingdom to teach Ukrainians new techniques for fighting the ...

US gas prices below $4 per gallon after demand falls

WASHINGTON D.C.: Providing relief to drivers in the United States, the average retail gasoline price in the US fell below ...

NEW YORK CITY, New York: Walmart could sign a deal with Disney, Paramount, or Comcast, with the aim of breaking ...

Domino's pizza shuts down all stores across Italy

MILAN, Italy: Milano Today has reported that seven years after launching in the country, American pizza giant Domino's has now ...

TOKYO, Japan: Toyota has advised the owners of its BZ4X electric SUV to stop driving their vehicles and return them ...

WASHINGTON D.C.: The U.S.Department of Justice is reportedly preparing to sue Google as soon as next month, claiming that the ...